This is beginning to sound like all the corrupt land/mortgage deals during the mission to bring the Olympics to Chicago…remember that?

The Barack Obama Presidential Library is the 14th presidential library administered by the National Archives and Records Administration (NARA), a federal agency.

Unlike other Presidential Libraries administered by NARA, the Barack Obama Presidential Library will be a fully digital library.  After the records are digitized, NARA will store and preserve the original materials in an existing NARA facility that meets NARA’s standards for archival storage.  A staff at that location will be responsible for caring for the records and artifacts.

Currently, the Obama administration materials are housed in a temporary facility in Hoffman Estates, IL, which is not open to the public.  Obama presidential records are administered in accordance with the requirements of the Presidential Records Act (PRA) and will not be subject to public Freedom of Information Act (FOIA) requests until January 20, 2022.

About the Obama Presidential Center

*** The judge nominated by former President Obama dealt a blow Tuesday to the former president’s efforts to build his presidential library in Chicago with a ruling that a lawsuit challenging the facility’s planned construction can go forward. 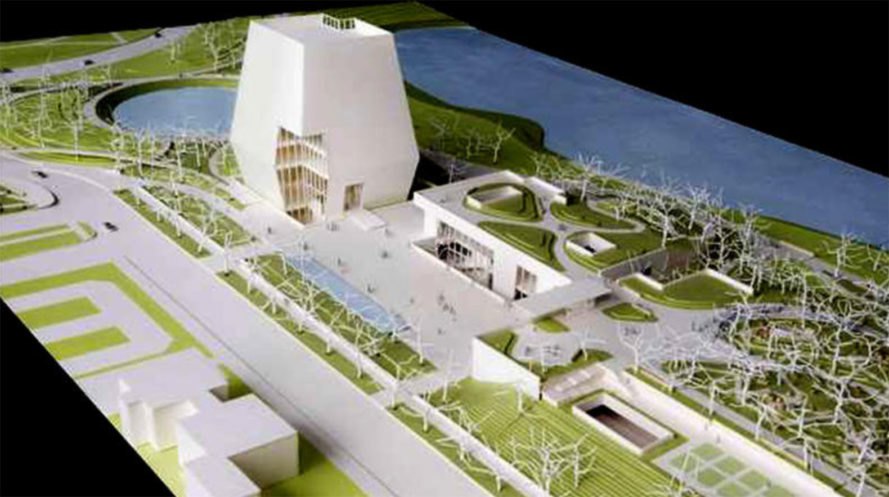 CHICAGO (AP) — A federal judge gave the green light Tuesday to a parks-advocacy group’s lawsuit that aims to stop for good the delayed construction of former President Barack Obama’s $500 million presidential center in a Chicago park beside Lake Michigan.

Supporters of the project had hoped the court would grant a city motion to throw out the lawsuit by Protect Our Parks, some fearing any drawn out litigation might lead Obama to decide to build the Obama Presidential Center somewhere other than his hometown.

A lawsuit brought by another group in 2016 helped to scuttle a $400 million plan by “Star Wars” creator George Lucas to build a museum on public land on Chicago’s lakefront. That museum is now under construction in Los Angeles .

Judge John Robert Blakey heard arguments last week on the city’s motion to dismiss. Blakey did toss parts of the suit in his Tuesday ruling, but concluded the group has standing to sue because it represent taxpayers with concerns that providing parkland in the public trust to the Obama center violates their due-process rights.

Blakey’s ruling doesn’t mean the group will necessarily prevail in the end, but confirms that the suit poses a formidable threat to the project. The judge indicated that he doesn’t want the litigation to drag out, and that he would strictly limit any fact gathering leading up to trial to 45 days.

“We are pleased that the court dismissed some of the claims and made clear that the proceedings will move forward expeditiously,” said Chicago corporation counsel Ed Siskel. It was also the view of the Obama Foundation in its one-sentence reaction to Blakey’s ruling.

Blakey tossed the plaintiffs’ claim that their First Amendment rights would be violated if tax money is used to construct a building to promote former President Barack Obama’s political interests.

He also found no merit in the plaintiffs’ claim they would suffer because of aesthetic and environmental harm to Jackson Park.

Blakey says his ruling “does not address the true facts of this case.”

Plans call for the center to be built in Jackson Park, which was named after President Andrew Jackson and was a site for the Chicago World’s Fair in 1893. The site 7 miles (11 kilometers) south of downtown Chicago is near low-income neighborhoods where Obama worked as a community organizer and is just blocks from the University of Chicago where Obama was a law professor. It is also close to the home where the Obamas lived until he won the presidency in 2008.

The center was originally slated to open in 2021, though ground hasn’t yet broken because of the lingering litigation.

In its 2018 suit , Protect Our Parks accused the city of illegally transferring park land to a private entity, The Obama Foundation, effectively “gifting” prized land to a Chicago favorite son. The group said city officials manipulated the approval process and tinkered with legislation to skirt long-standing laws designed to ensure residents have unobstructed access to lakeside parks.

“Defendants have chosen to deal with it in a classic Chicago political way … to deceive and seemingly legitimize an illegal land grab,” the lawsuit says.

To make the park available for the project, the Chicago Park District first sold the land to the city for $1. Illinois legislators amended the state’s Illinois Aquarium and Museum Act to include presidential libraries as an exception to the no-development rules if there’s a compelling public interest. The Chicago City Council approved the project by a 47-to-1 vote last May.

The Obama Foundation, a private nonprofit, would pay $10 to the city for use of the park land for 99 years, cover the costs of building the complex and be responsible for covering operating costs for 99 years. Once built, the Obama Presidential Center’s physical structures would be transferred to the city for free, meaning the city would formally own the center but not control what happens there.

“They are essentially giving (property) to Obama … for 10 cents a year for 99 years,” parks advocacy lawyer Mark Roth said Thursday.

In a friend-of-the-court brief , legal scholar Richard Epstein said public-trust doctrine places an extra burden on authorities to prove overwhelming public benefit when they offer the use of public parks to such well-connected figures as Obama, who remains hugely popular in the heavily Democratic city. Chicago Mayor Rahm Emanuel once served as Obama’s White House chief of staff.

One claim Blakey tossed Tuesday was that taxpayers’ First Amendment rights would be infringed upon because tax money would be spent to reconfigure roads and traffic. The suit argued that taxpayers would thus subsidize any partisan political activity by Obama at the center.

City lawyers conceded Thursday that Chicago would pay an estimated $175 million to reconfigure roads to manage traffic around the center.

The lawsuit also claims that the center would interfere with migrating butterflies and birds.

The center would comprise 20 acres (8 hectares) of the 500-acre (202-hectare) park. Its centerpiece would be a 225-foot (69-meter) museum tower, surrounded by a cluster of smaller buildings, including a 300-seat auditorium.

City lawyers said it would bring a major economic boost to poor local minority communities. Backers estimate it would create 5,000 jobs during construction and over 2,500 permanent jobs. An estimated 760,000 people could visit each year.