The Pentagon has a civilian advisory committee where retired flag officers meet and discuss global and domestic conflicts, research them and then present those items to key Pentagon personnel. The question is, do any discussions include the battle for the Arctic?

When General Lloyd Austin, Secretary of Defense says that climate change and white supremacy are the biggest existential threat to the homeland…others for sure are arguing other real threats and that includes the Arctic.

Back in March of 2018, testimony was presented the Senate Armed Services Committee by commanders of the U.S. Pacific Fleet, the U.S. European Command and the Coast Guard Commandant that the Russian footprint in the Arctic has robustly surpassed that of the United States.

The U.S. lacks abilities
Despite a change in rhetoric, the facts on the ground remain the same: The U.S. is falling further and further behind in the region, operating a single aging polar-class icebreaker.

“The Arctic is the only theater of operations where the U.S. Navy is outclassed by a peer competitor. Russian surface warships have demonstrated the ability to carry out complex combined operations in the High North, while the American Navy maintains a policy that only submarines operate above the Bering Strait. Are submarines enough of a deterrence? Probably. But I don’t think they provide the real presence needed to assert the U.S.’ rights to the opening Arctic,” Holland explains.

Any reaction by the U.S. to catch up in the Arctic comes about 10 years to late, says Huebert. “Yes, as the current ICEX military exercise shows U.S. submarines have the capability of patrolling the Arctic and surfacing through the ice, but what is lacking are the constabulary capabilities in the form of surface vessels and icebreakers.”

Is the U.S. Waking up?
After more than a decade of lobbying by the U.S. Coast Guard to secure funds to construct a new icebreaker, the agency may finally make progress on this front. Congress’ upcoming appropriations bill is likely to include funding to design and construct a new icebreaker. Still, this falls way short of what would be needed, says Holland. “That is good, but it is late, and there’s no commitment to build the three to five more [icebreakers] that is estimated we’ll need. Nor is there any thought about designing the Navy’s ships of the future so they can operate in the High North.”

Holland hopes that the change in rhetoric marks a newfound seriousness by America’s military leadership about the rapidly growing challenges in the Arctic. This also includes China’s emergence as an Arctic power and its desire to utilize the NSR as its own Polar Silk Road as laid out in its newly-released Arctic strategy.

“These countries have a clear strategic vision for what they want out of the Arctic. As do European Arctic states. It’s time for the U.S. to stand up for its rights and responsibilities as an Arctic nation.” More here.

Why is this even a topic for real?

President Vladimir Putin in recent years has made Russia’s Arctic region a strategic priority and ordered investment in military infrastructure and mineral extraction.

Moscow: Russian Foreign Minister Sergei Lavrov on Monday warned Western countries against staking claims in the Arctic ahead of this week’s Arctic Council meeting in Reykjavik.

The Arctic in recent years has become the site of geopolitical competition between the countries that form the Arctic Council (Russia, the United States, Canada, Norway, Denmark, Sweden, Finland and Iceland) as global warming makes the region more accessible.

A ministerial meeting of the eight-country council will take place on Wednesday and Thursday.

“It has been absolutely clear for everyone for a long time that this is our territory, this is our land,” Lavrov said at a press conference in Moscow.

“We are responsible for ensuring our Arctic coast is safe,” he said.

“Let me emphasise once again — this is our land and our waters,” he added.

“But when NATO tries to justify its advance into the Arctic, this is probably a slightly different situation and here we have questions for our neighbours like Norway who are trying to justify the need for NATO to come into the Arctic.”

The United States in February sent strategic bombers to train in Norway as part of Western efforts to bolster its military presence in the region.

For the first time since the 1980s, the US Navy deployed an aircraft carrier in the Norwegian Sea in 2018.

President Vladimir Putin in recent years has made Russia’s Arctic region a strategic priority and ordered investment in military infrastructure and mineral extraction.

As ice cover in the Arctic decreases, Russia is hoping to make use of the Northern Sea Route shipping channel to export oil and gas to overseas markets.

Lavrov will meet with his US counterpart Antony Blinken on the sidelines of the Arctic Council ministerial meeting in a test of Moscow’s strained relationship with Washington.

Despite mounting tensions, Russia and the United States during climate negotiations earlier this year noted the Arctic as an area of cooperation.

Three Russian ballistic missile submarines participated in Arctic training drills near the North Pole, and the Russian Ministry of Defense shared footage on Friday of the submarines bursting through the ice.

The drills entailed Russian submarines breaching the ice and Russian troops conducting cold-weather ground maneuvers on the open ice. A pair of MiG-31 Foxhound jet interceptors also flew over the Arctic, with support from an Il-78 aerial refueling tanker. According to Russia’s Navy, about 600 Russian military personnel and civilian personnel were present and about 200 models of Russian weapons and military equipment were involved. Source 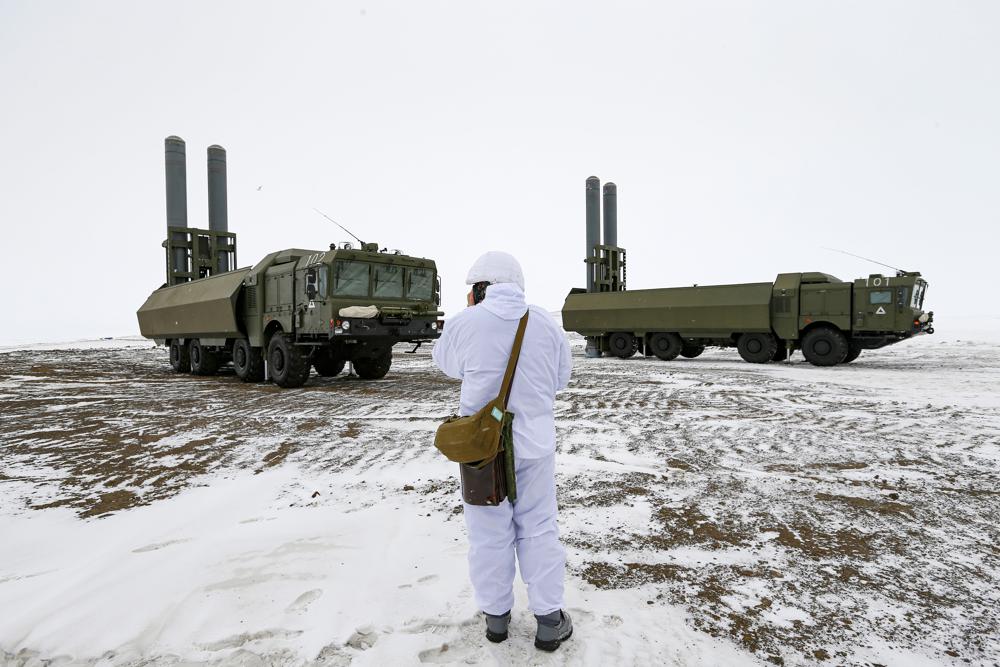 An officer speaks on walkie-talkie as the Bastion anti-ship missile systems take positions on the Alexandra Land island near Nagurskoye, Russia, Monday, May 17, 2021. Bristling with missiles and radar, Russia’s northernmost military base projects the country’s power and influence across the Arctic from a remote, desolate island amid an intensifying international competition for the region’s vast resources. Russia’s northernmost military outpost sits on the 80th parallel North, projecting power over wide swathes of Arctic amid an intensifying international rivalry over the polar region’s vast resources. (AP Photo/Alexander Zemlianichenko)

For a scary photo essay of the Russians in the Arctic, click here.

So while it appears that nobody is really heeding these warnings, yet another discussion was held in 2019 at the Aspen Security Conference. Here the Pentagon released a new Arctic strategy document challenging and addressing the gains made by China and Russia in the Arctic region.

Moscow is deploying more resources northwards and investing in Arctic-capable forces, while Beijing has declared itself a “near-Arctic” power. The U.S. is moving to meet this challenge and give the region more prominence in its strategic planning.

Schultz said the U.S. “should be concerned about Russia, who is way ahead of us in this game, and the emerging aggressive China, who is pushing into the game.” He noted that while Americans may “think about the Arctic as a very faraway place,” the “Russian world view is very much based on the Arctic.”

A “polar security cutter” is currently under construction for the Coast Guard, effectively a militarized ice breaker. Its order demonstrates the U.S military pivot towards the Arctic and an effort to close the gap with its rivals, particularly Russia. More here.

In part of that released strategy document is the following:

NDS goals and priorities guide DoD’s strategic approach to the Arctic.The Joint Force must be able to deter, and if necessary, defeat great power aggression. DoD must prioritize efforts to address the central problem the NDS identifies–i.e., the Joint Force’s eroding competitive edge against China and Russia,and the NDS imperative to ensure favorable regional balances of power in the Indo–Pacific and Europe. Developing a more lethal, resilient, agile, and ready Joint Force will ensure that our military sustains its competitive advantages, not only for these key regions of strategic competition, but globally as well.Maintaining a credible deterrent for the Arctic region requires DoD to understand and shape the Arctic’s geo–strategic landscape for future operations and to respond effectively to contingencies in the Arctic region, both independently and in cooperation with others. DoD’s strategic approach seeks to do so by implementing three ways in support of thedesired Arctic end–state(each described in detail in this document):

•Strengthening the rules–based order in the Arctic