Abu Hamza was once deeply affiliated with the Finsbury Park mosque including raising funds for jihad there. Born Mustafa Kamel Mustafa in Alexandria, Egypt, on 15 April 1958, Abu Hamza was the son of a naval officer and a primary school headmistress. He initially studied civil engineering before leaving for England in 1979. More here.

A trustee at one of London‘s best-known mosques is a senior member of ‘terrorist organisation’ Hamas’s political wing, it was reported.

Mohammed Sawalha holds the role of trustee at Finsbury Park Mosque in north London, which was formerly linked to extremism but which insists it has since undergone an ‘complete overhaul’.

Sawalha, who lives in London, was appointed a trustee of the mosque in 2010 and is legally responsible for overseeing the mosque’s management, The Times reported. More here.

He was one of five senior figures from the Islamist organisation who were sent to Moscow in September, where they met Russia’s deputy foreign minister Mikhail Bogdanov and other Kremlin officials. 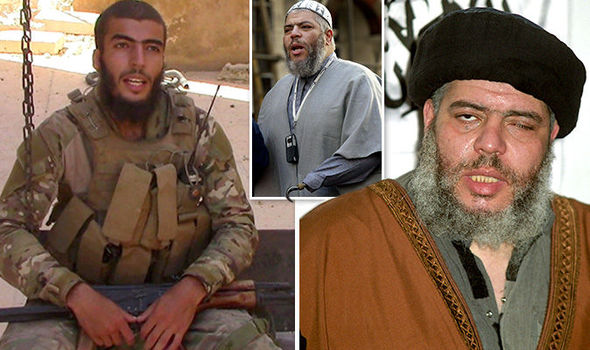 ABU Hamza’s son, Sufyan Mustafa, has said he will fight to return to his life in Britain after the Government stripped him of his passport, leaving him in war-torn Syria. In 2012, Imran Mostafa, another of Hamza’s sons was jailed for his role in a jewellery heist in Norfolk.

The hook-handed cleric says he interpreted the message as being about an impending terrorist strike on America and believes the phone at his west London home was being “tapped” by police at the time.

His claim raises questions about whether British authorities were aware of the warning and failed to pass it on to their American counterparts before al-Qaeda operatives flew hijacked jets into the World Trade Center in New York and the Pentagon in September 2001.

Details of the phone call are revealed in American court papers, seen by The Sunday Times, which also reveal that Abu Hamza acted as an agent for MI5 and Special Branch under the code name “Damson Berry”. The former imam of Finsbury Park mosque in north London is appealing against his conviction for terrorist offences and his “inhuman” incarceration at an American“supermax” prison.

In a 124-page handwritten submission, Abu Hamza says he has been singled out and “punished” since 9/11. He writes in broken English: “What made pro-war governments and intelligence [agencies on] both sides of the Atlantic more furious about the defendant [Abu Hamza is] that defendant received a call from Afghanistan on Friday, Sept 7, 2001, from 2 of his old neighbours in his Pakistan time (1991-93) saying ‘Something very big will happen very soon’ (meaning USA).”

Abu Hamza denies the call came from al-Qaeda figures, but says he thought “this news is widely spread and everyone is phoning friends . . . the intelligence [agencies] of many countries must have had an earful about it”.

The preacher’s claim could not be independently corroborated this weekend, but his standing in extremist circles makes it plausible.