Primer: Actually it is not so much re-branded as Obama applied ‘win the future’ in the 2011 State of the Union address.

Furthermore: A report by The Hill says Obama has been making regular calls with Democratic National Committee Chairman Tom Perez. According to an anonymous source in the DNC, Obama jokingly told Perez, “Hey man, it’s only the future of the world in your hands.” Working out of his D.C. office, Obama is said to be conducting one-on-one meetings with other legislators, like Maryland’s freshman Democratic Sen. Chris Van Hollen. Still, sources that spoke to The Hill stopped short of divulging a more complete list of the meetings Obama has had. More here.

BusinessInsider: “WTF” is a fitting abbreviation for LinkedIn founder Reid Hoffman’s newest project to rethink what the Democratic Party is today.

Called Win the Future, WTF is starting as a “people’s lobby” where people can vote on policy topics that are important to them, like making engineering degrees free for everyone.

“We need a modern people’s lobby that empowers all of us to choose our leaders and set our agenda,” said Mark Pincus, the billionaire cofounder of Zynga who is partnering with Hoffman to start WTF. “Imagine voting for a president we’re truly excited about. Imagine a government that promotes capitalism and civil rights.”

Despite its roots with two powerful tech founders, WTF is taking an old-school approach to start. People will vote on the policies and discuss them on Twitter. The group plans to turn the ones that seem to resonate into billboards in Washington, DC, with congressional leaders the target audience.

While it wants to get the attention of members of Congress, WTF is also unabashedly “not for pro-politicians.” According to Recode, one of WTF’s more audacious plans has been to recruit political outsiders to run as “WTF Democrats” and challenge the old stalwarts of the Democratic Party. Pincus specifically targeted Stephan Jenkins from the band Third Eye Blind, according to Recode.

Those plans are on hold for now, though, as the group focuses on the launch of its billboard campaigns and on building a political platform.

Progressive leaders have already criticized WTF’s launch, however, as an incredibly off-base pet project for two billionaires, according to a Huffington Post report. 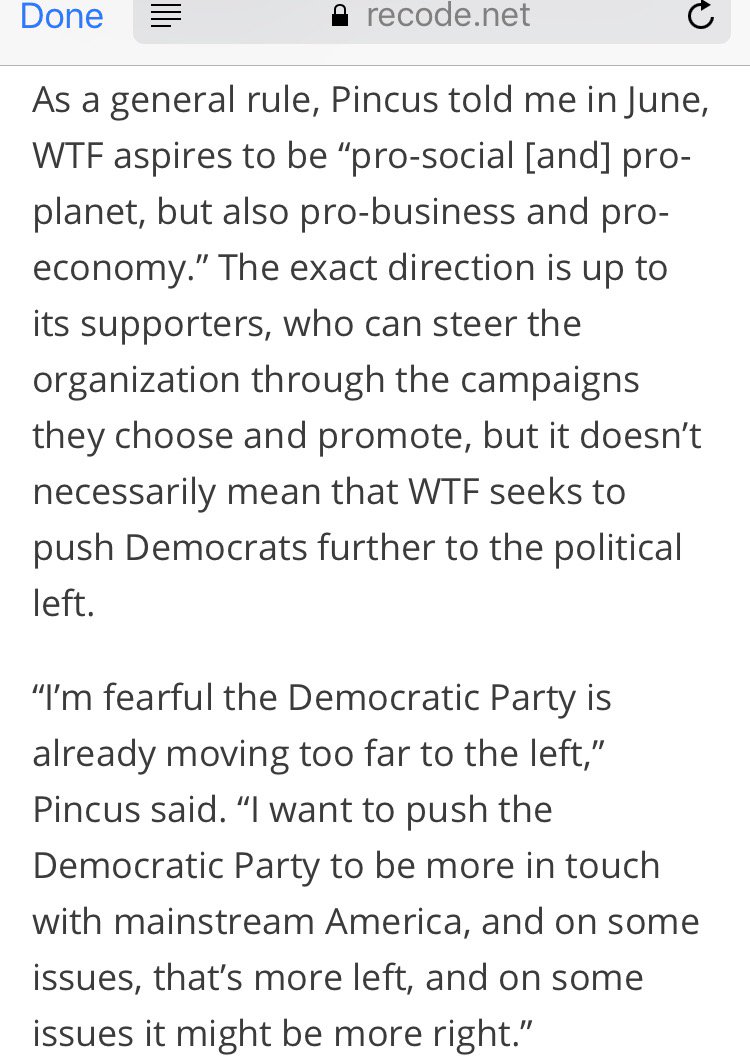 “I am not sure the creators of the lamest and the most annoying social-media experiences are the exact people who should be rewiring the philosophical core of the Democratic Party as they say they want to,” Alex Lawson, the executive director of Social Security Works, told The Huffington Post.

Despite the early criticism, Pincus and Hoffman have together committed over $500,000 to build out the project — and they’re still raising money to bring the billboard campaign to life.

“We can’t wait until elections to fight for what we care about. We can’t hope for a benevolent leader who may choose to listen to us,” Pincus wrote in his note on the vision of WTF. “We need a network that lets the best ideas and leaders rise to the top through an open, inclusive democratic process.”

So….who is on this Obama team now?

J. Kevin Poorman, President The Obama Foundation, president of PSP Capital Partners of which Penny Pritzker is the founder.

Juliana Smoot, White House social secretary for Obama, Deputy Assistant to Obama, she also worked for Dick Durbin, John Edwards, Chuck Schumer and her husband is the chairperson for the Michigan Democrat Party

The Obama Foundation is working on a start up for citizenship, it is an ongoing project for the 21st century. This project has a global objective and will include being a digital citizen.