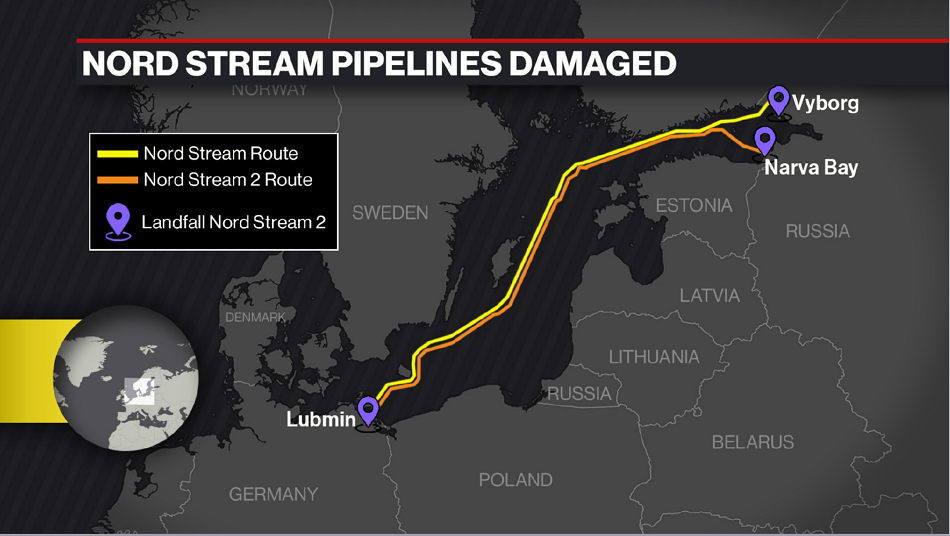 According to a German security official, the evidence points to a violent act rather than a technical issue. Swedish seismologists detected two explosions in the area, when leaks appeared almost simultaneously in the Baltic Sea.

PM: Trond Larzen, a drone operator with the Norweigian company Blueye Robotics said, “it is only an extreme force that can bend metal that this in the way we are seeing.”

New footage released on Tuesday has revealed the extent of damage to the Nord Stream 1 pipeline, which runs under the Baltic Sea from Russia to Germany.

The footage, published by the Swedish newspaper Expressen, shows a tear in the pipeline, with 165 feet of it either being destroyed or buried under the seabed, according to the Daily Mail.

80 meters under the surface, a deep trench can also be seen where the gas pipeline used to lie.

The outlet said that the section filmed was likely one to the northeast of the Danish island of Bornholm, a section being investigated by Swedish authorities.

Two of the leaks lie in the Swedish economic exclusion zone, and two lie in the Danish zone.

Authorities in Sweden and Denmark have been investigating the four holes that appeared after explosions on September 26. Though the lines were not operational at the time, gas inside the lines leaked out, causing waves and disturbances to the sea’s surface.

On Tuesday, Danish officials confirmed that there is “extensive damage” to both Nord Stream 1 and 2, caused by “powerful explosions.” Swedish investigators came to a similar conclusion on October 6.

Speaking with Expressen, Trond Larzen, a drone operator with the Norweigian company Blueye Robotics said, “it is only an extreme force that can bend metal that this in the way we are seeing.”

Larsen, who captured the video in a piloted submersible drone, said you could also see “a very large impact on the seabed around the pipe,” and that the explosions measured 2.3 on the Richter scale.

On October 6, Swedish authorities announced that they conducted an underwater investigation of the site, and that they collected “pieces of evidence” that point to probable sabotage.

“We can conclude that there have been detonations at Nord Stream 1 and 2 in the Swedish exclusive economic zone that has led to extensive damage to the gas pipelines,” public prosecutor Mats Ljungqvist said in a statement at the time.

Ljungqvist added that the “crime scene investigation had strengthened the suspicions of aggravated sabotage.”

Leaders across the globe have pointed to potential Russian sabotage as the source of the pipeline explosions. The Kremlin though has pointed its finger at the United States.