The speculation for this ship is:

There are new indications that the spying target this time also included SpaceX’s space launch capability.

On Monday, the private space launch company founded by tech entrepreneur Elon Musk conducted the 13th successful launch of its Falcon 9 booster from Cape Canaveral, Florida. The launcher placed a communications satellite into orbit and then returned to Earth by landing on a barge in the Atlantic eight minutes later.

Analysts speculate that the ship may have been observing the launch to gather data that could benefit reusable Russian space launchers.

U.S. Northern Command and the Coast Guard have been tracking a Russian spy ship equipped with electronic surveillance gear that has been lurking off the East Coast of the United States.

On Monday, the Coast Guard sent out a Maritime Safety Information Bulletin warning boaters of reports of the Viktor Leonov operating in an “unsafe manner” off the coast of South Carolina and Georgia.

On Tuesday, the Coast Guard said the Russian ship was operating in USCG’s Jacksonville, Florida, area of responsibility, which encompasses roughly 40,000 square miles of ocean and stretches nearly 190 miles of coast from Kings Bay, Georgia, to Port Malabar, Florida.

“This unsafe operation includes not energizing running lights while in reduced visibility conditions, not responding to hails by commercial vessels attempting to coordinate safe passage and other erratic movements,” the Coast Guard posted on its bulletin.

“Vessels transiting these waters should maintain a sharp lookout and use extreme caution when navigating in proximity to this vessel. Mariners should make reports of any unsafe situations to the United States Coast Guard,” the Coast Guard said in its safety message.

“We are aware of Russia’s naval activities, including the deployment of these intelligence collection ships in the region,” Maj. Mark R. Lazane, a spokesman with NORTHCOM, told Military Times in an emailed statement. 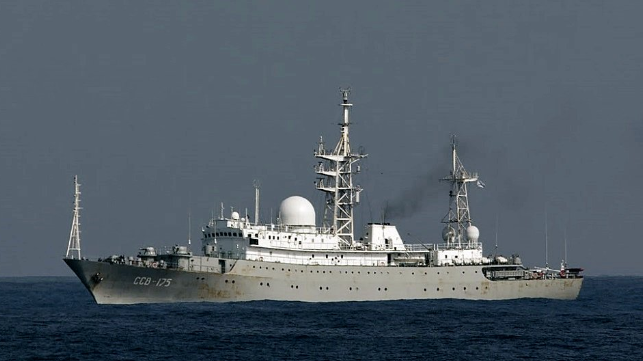 It’s not the first time the Viktor Leonov has conducted intelligence operations off the East Coast off the U.S.

In 2017, the Pentagon announced the Leonov was being trailed by a Coast Guard vessel but was operating in international waters.

“They routinely deploy intelligence vessels worldwide to monitor the activities and particularly naval activities of other nations, but then again conducted lawfully in international waters and not unlike operations we conduct ourselves,” Davis said in 2017 about the Leonov operating near the East Coast of the U.S.

Foggo said that the Coast Guard reported that the Russian ship was not responding to signals or “bridge to bridge” radio communications and was running without lights on at sea.

This ship is part of Project 864. The Project 864, also known as the Vishnya and Meridian, is an electronic surveillance and intelligence gathering ship built by Stocznia Polnocna shipyard in Gdansk (Poland) for the Soviet Union’s Navy in the 1980s. The ship’s capabilities are built around the Communication Intelligence (COMINT) and Signals Intelligence (SIGINT) concepts. The Project 864 are equipped with two satellite communications antennas inside a radome. The propulsion system consists of two diesel engines developing 4,400-bhp and a top speed of 16 knots. The Project 864 weapon system is intended to counter airborne threats using two AK-630 30mm guns and two SA-N-8 surface-to-air missile systems. The Russian Navy operates seven Meridian-class vessels to be replaced by the Project 18280 intelligence ship by 2020.