Those that take heed and prepare are left to help a country survive. Sweden is a member of the European Union. Question is what is the EU Headquarters in Brussels response to this? So far, silence.

It is all due to Russia, Crimea and Ukraine especially Kaliningrad. Roughly 220 miles of ocean separates Sweden from the heavily militarized Russian port of Kaliningrad. The country’s long, narrow shape leaves it vulnerable to air assault from multiple sides. And Sweden, along with neighboring Finland, are in the unique position as the only non-NATO aligned nations on the Baltic Sea.

Hence, the nation spent the Cold War years preparing to fend for itself against a great power invasion, drawing up plans for how to mobilize the entirety of the civilian population and infrastructure to defend its territory. And then the Soviet Union collapsed, a new era of peace dawned and those plans were left to fall fallow.

Sweden has not gone to war with another country for over two centuries, but that hasn’t stopped the government from reissuing an emergency manual from World War II that advises citizens on how best to cope with hypothetical hostilities.

“What would you do if your everyday life was turned upside down?” the English language version of the manual begins.

Since supplies could run low during a crisis, the leaflet provides checklists of what to stock up on, including mineral water, wet wipes and tinned hummus. It also offers tips on where to find bomb shelters, what to do without access to ATMs, cellphones or the internet, and how to spot propaganda.

** Very interesting. #Sweden has sent a pamphlet with instructions on how to “be prepared for war” to 4.8million homes. Random quote: “If Sweden is attacked … we will never give up. All information to the effect that resistance is to cease is false.” https://www.dinsakerhet.se/siteassets/dinsakerhet.se/broschyren-om-krisen-eller-kriget-kommer/om-krisen-eller-kriget-kommer—engelska.pdf … 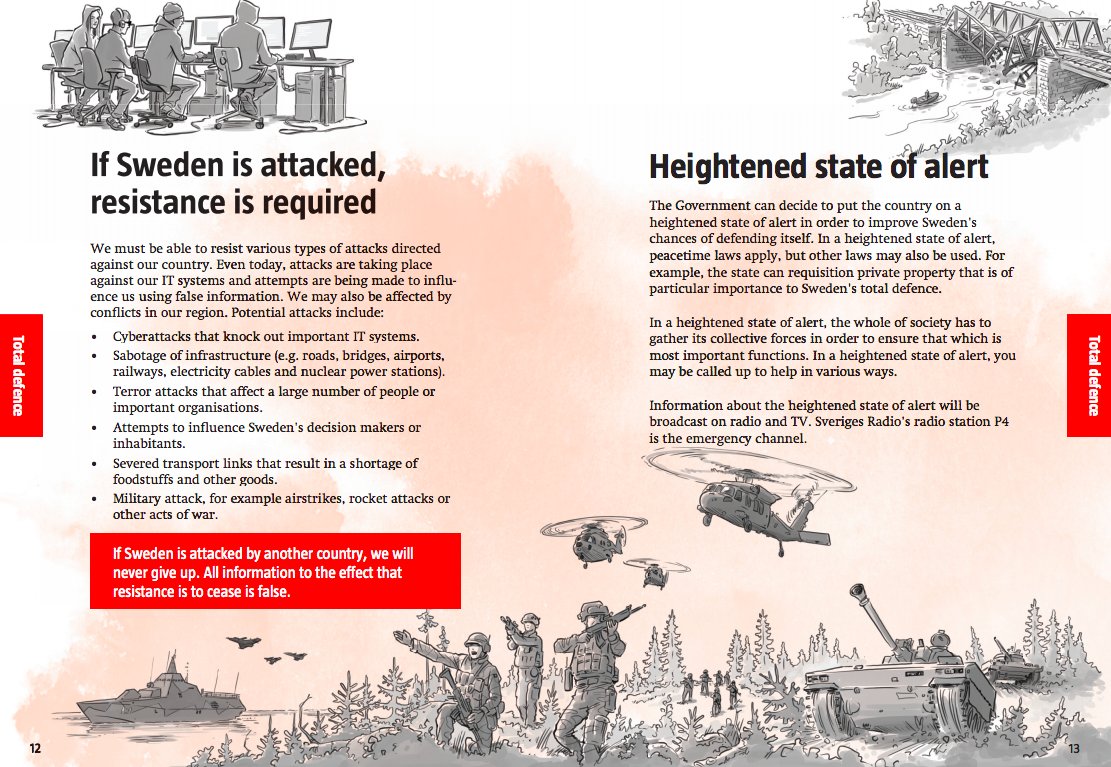 “Although Sweden is safer than many other countries, there are still threats to our security and independence,” the brochure says. “If you are prepared, you are contributing to improving the ability of the country as a whole to cope with a major strain.”

The illustrated instructions went online Monday and are being sent to all 4.8 million households in the country in the first such public awareness campaign since 1961. The handbook was last updated for government officials’ use during the Cold War, according to the Guardian.

The newly minted pamphlets do not specify an attacker, but their release comes amid escalating security concerns following Russia’s annexation of Crimea in 2014. Sweden has accused Moscow of repeatedly infringing on its airspace and territorial waters — claims the Kremlin dismisses as “Russiaphobia.”

Sweden began increasing its military spending in 2016, reversing years of cuts. It also reinstated the military draft last year, citing Russian assertiveness as one of the justifications, and is considering joining NATO.

In the event of a “heightened state of alert,” the pamphlet emphasizes the expectation that everyone can be marshaled for Sweden’s “total defense.”

“If Sweden is attacked by another country, we will never give up,” the publication reads. “All information to the effect that resistance is to cease is false.”

Similar leaflets were first distributed in neutral Sweden in 1943, at the height of the second world war. Updates were issued regularly to the general public until 1961, and then to local and national government officials until 1991.

“Society is vulnerable, so we need to prepare ourselves as individuals,” said Dan Eliasson of the Swedish civil contingencies agency, which is in charge of the project. “There’s also an information deficit in terms of concrete advice, which we aim to provide.” 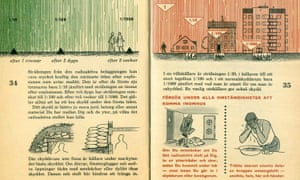