Offering apologies from this site as in recent days, several items have been posted discussing Russian aggressions. There is a reason, perhaps many.

Today, May 12, 2016, the missile shield located in Romania went live and this has further angered Russia.

The missile interceptor station in Deveselu, southern Romania, will help defend NATO members against the threat of short and medium-range ballistic missiles — particularly from the Middle East, US assistant secretary of state Frank Rose told a news conference in Bucharest Wednesday.

But Russia has taken a dim view of the project, seeing it as a security threat on its doorstep.

“Both the US and NATO have made it clear the system is not designed for or capable of undermining Russia’s strategic deterrence capability,” Rose said.

“Russia has repeatedly raised concerns that the US and NATO defence are directed against Russia and represents a threat to its strategic nuclear deterrent. Nothing could be further from the truth.” 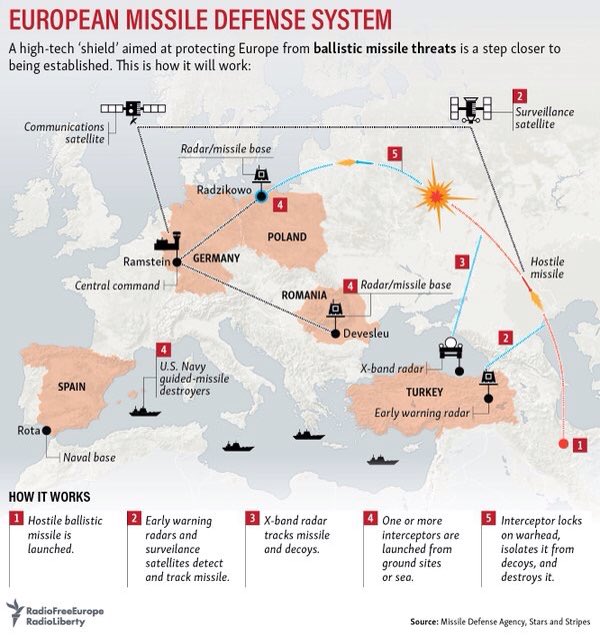 Russia has a response and actually Britain did as well. Britain says Typhoon fighters intercepted three Russian military transport aircraft approaching Baltic states. The British fighters, scrambled from the Amari air base in Estonia, intercepted the Russian aircraft, which were not transmitting a recognised identification code and were unresponsive, the ministry said.

To add to the matter, the missile defense system slated for Poland that Barack Obama cancelled a few years ago is about to go live as well. This system was for the most part a private investment between U.S. contractors and European countries.

Poland chose the U.S. defense company’s bid over a rival European offering and one from the MEADS consortium led by Lockheed Martin Corp. LMT 1.05 % Officials also selected a unit of Airbus Group NV to supply 50 military helicopters—down from its previous plan for 70—over bids from U.S.-based Sikorsky and AgustaWestland, a European consortium. Poland has pledged to increase its military spending amid concerns that the smoldering separatist conflict in eastern Ukraine will erupt into a full-scale military conflict. Warsaw plans to return to its earlier policy of spending 2% of gross domestic product on its armed forces in 2016, after it scaled back spending in recent years to shore up its public finances. The missile shield is expected to be a part of the North Atlantic Treaty Organization’s long-running project to deter missile attacks in Europe. The project is hotly contested by Moscow, which argues its aim is to threaten Russia rather than to protect itself from a potential threat from Iran, as NATO has said in the past. More here from the WSJ.

The US has switched on a missile shield in Romania that it sees as vital to defending itself and Europe from long-range missiles fired by rogue states, prompting anger from the Kremlin which believes the shield’s main goal is to weaken its own strategic nuclear capabilities.

The eventual missile shield will stretch from Greenland to the Azores, and will be ready by the end of 2018. On Friday, the US will break ground on a final site in Poland. The proposal was first agreed by the administration of George W Bush a decade ago and is a longstanding gripe for Moscow, despite repeated assurances from Washington that it is not aimed against Russia. Control of the missile shield will be handed over to Nato in July, with command and control run from a US airbase in Germany.

Poland is concerned Russia may retaliate further by announcing the deployment of nuclear weapons to its enclave of Kaliningrad, located between Poland and Lithuania. Russia has stationed anti-aircraft and anti-ship missiles there, able to cover huge areas and complicate Nato’s ability to move around.

The Kremlin says the shield’s aim is to neutralise Moscow’s nuclear arsenal long enough for the US to strike Russia in the event of war. While US and Nato officials were adamant that the shield was designed to counter threats from the Middle East and not Russia, they remained vague on whether the radars and interceptors could be reconfigured to defend against Russia in a conflict. More from the Guardian.