Baraq Obama remains a community organizer and cannot bend his thinking to anything in the foreign realm. If a sitting president can apply the nickname of the JV squad to Daesh (Islamic State) and then do the same by applying Khorasan Group to the most battle-hardened factions of Pakistan/Afghanistan based al Qaeda then clearly he is dismissive.

This apathetic policy by the White House when it comes to foreign leaders manifests the threat matrix of terror. Due to Mr. Obama ignoring the matter of Syria three years ago has caused a humanitarian crisis of historic proportions. Lebanon has 1.2 million Syrian refugees, Jordan and Turkey has hosting over 2.0 million each in tent cities and the United Nations is screaming that they are out of funds to continue humanitarian aid to those three countries and even Iraq and Syrian refugees. Those that have died at the hands of Bashir al Assad has exceeded 200,000. This crisis of Daesh, al Nusra, death, chemical weapons, al Qaeda and more sits squarely in the lap of Baraq Obama. Just the recent air-strikes has cost the Pentagon over $700 million.

Today Syria remains the incubation and training locations for jihads interns globally and thousands of militia groups and terror organizations flow in and out of Syria. Yet today, America has become Bashir al Assad’s air force. Twisted conditions.

Now, Turkey a NATO country, has jumped the allied side and is supporting terror factions. In case there is any question, Daesh (Islamic State) has opened their very own consulate in Turkey. Qatar is the resort of choice for yet other top terror leaders such as Hamas, the Palestinian Authority and the Taliban, who only recently beheaded 15 people in Afghanistan.

So, what about terror and safety in the rest of the world?

US government to its people: Stay away from these countries

The world can be a dangerous place. Depending on where you live, you’re reminded of that every time you turn on the TV or read the news.

If you are citizen of the United States there’s also another consistent reminder: State Department travel warnings.

According to the US Passport and International Travel Office:

“We issue a Travel Warning when we want you to consider very carefully whether you should go to a country at all. Examples of reasons for issuing a Travel Warning might include unstable government, civil war, ongoing intense crime or violence, or frequent terrorist attacks. We want you to know the risks of traveling to these places and to strongly consider not going to them at all. Travel Warnings remain in place until the situation changes; some have been in effect for years.”

We catalogued all the travel warnings now in effect and created the graphic below to show all the places where the US government doesn’t want its citizens going: 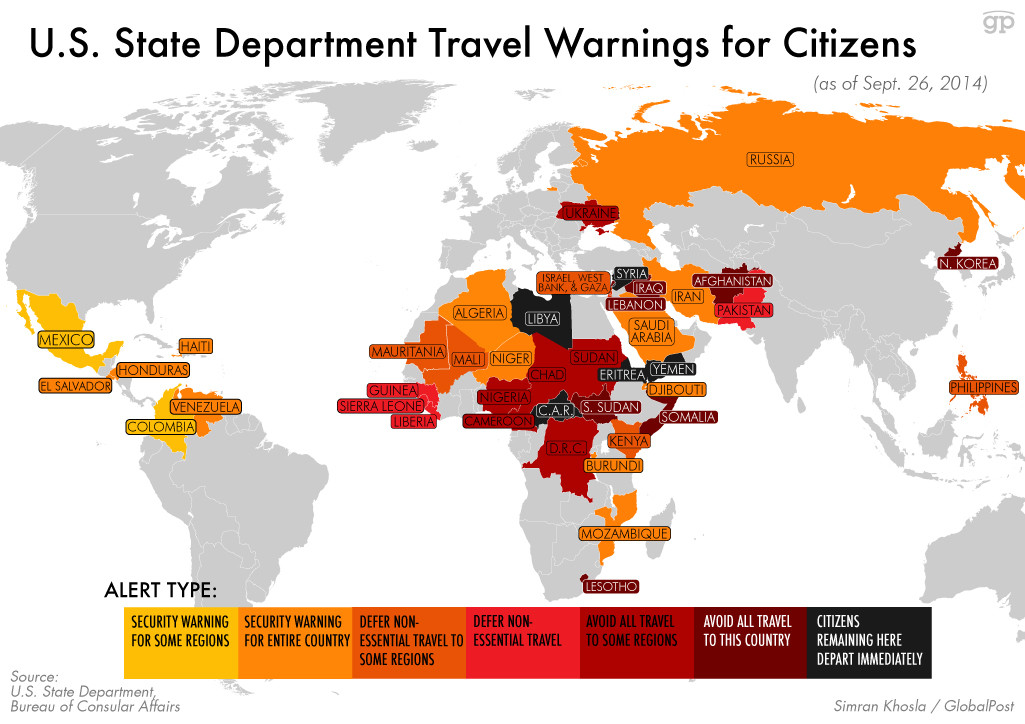 Let’s also not forget that the United States can be a very dangerous place itself, and that US foreign policy has helped turn some of these countries into the dangerous places they are now.

Click on any of the countries below to see the detailed warning issued by the US State Department:

Security Warning for Some Regions: Colombia and Mexico.

Avoid All Travel to Some Regions: Ukraine, Nigeria, Cameroon, Democratic Republic of the Congo, Sudan and Chad.

So much for having a commander in chief that has influence, power and leadership worldwide and keeping America safe and not even a local community like Moore, Oklahoma is safe either. This sitting president and his community service is not working either.

Keep safe my friend…lock and load.