CTC: Nasir al-Wahayshi, AQAP’s Leader
Nasir al-Wahayshi is a tiny wisp of a man with a jutting beard and soft-spoken manner. Known by the kunya Abu Basir, he was born in 1976 in the region of Mukayras in what was then Abyan.[3] Redistricting in 1998 put Mukayras in al-Bayda and that same year al-Wahayshi left Yemen for Afghanistan.[4] He had just graduated from one of Yemen’s private religious institutes, which had been established in the 1970s and 1980s as a way to convince Yemeni tribesmen that a republican form of government was compatible with Islam. Staffed by Egyptian exiles and Saudi teachers, many of these institutes eventually gravitated toward the more radical works of Islamic theology.

Al-Wahayshi arrived in Afghanistan in the months after Usama bin Ladin’s 1998 fatwa, declaring war on the United States and Israel, and he soon joined al-Qa`ida. Bin Laden made the young Yemeni his personal secretary, and for the next four years the two were nearly inseparable.[5] Al-Wahayshi spent all of his time with Bin Ladin, watching as the older man built and ran an international organization. He sat in on councils and helped with correspondence.

After the 9/11 attacks and the confused aftermath of the Battle of Tora Bora in late 2001, al-Wahayshi was separated from the al-Qa`ida commander. Bin Laden escaped into Pakistan, while al-Wahayshi moved south toward Iran, where he was eventually arrested and held for nearly two years.[6] In late 2003, al-Wahayshi was extradited back to Yemen. Apparently unaware of his close connections to Bin Ladin, Yemeni intelligence held him in the general prison population at a maximum-security facility in Sana`a. 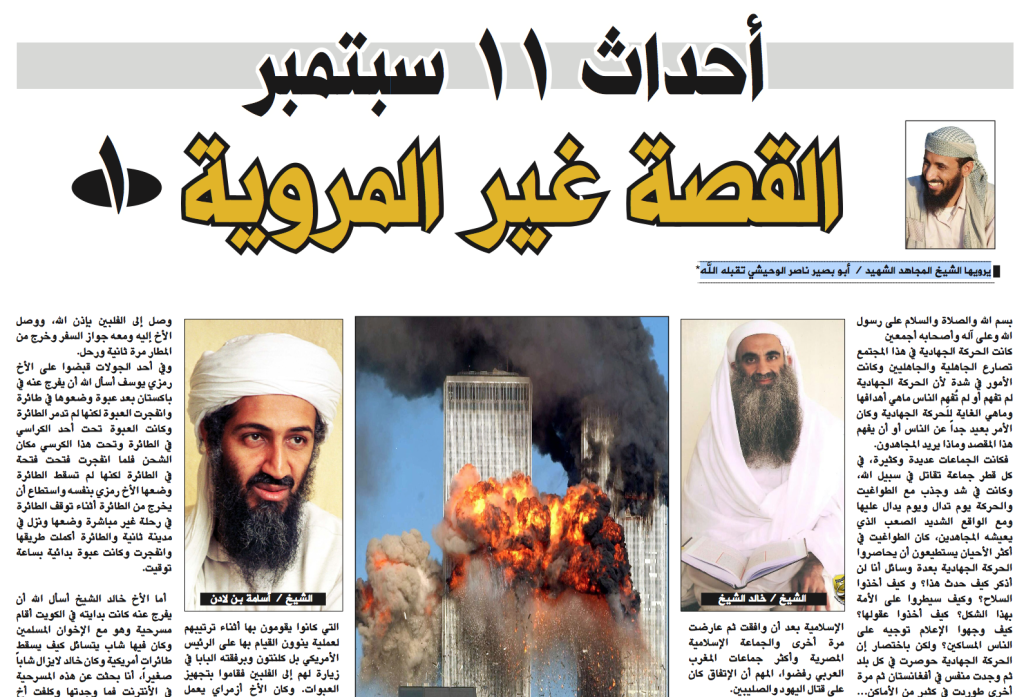 TLWJ: Sometime before his death in a US drone strike in June 2015, Nasir al Wuhayshi recorded an insider’s account of the Sept. 11, 2001 terrorist attacks. As the aide-de-camp to Osama bin Laden prior to the hijackings, Wuhayshi was well-placed to know such details. And al Qaeda in the Arabian Peninsula (AQAP), which Wuhayshi led until his demise, has now published a version of his “untold story.”

A transcript of Wuhayshi’s discussion of the 9/11 plot was included in two editions of AQAP’s Al Masra newsletter. The first part was posted online on Jan. 31 and the second on Feb. 9. The summary below is based on the first half of Wuhayshi’s account.

Wuhayshi began by explaining al Qaeda’s rationale for attacking America. Prior to 9/11, the jihadists’ cause was not supported by the Muslim people, because the mujahideen’s “goals” were not widely understood. The jihadists were divided into many groups and fought “tit-for-tat” conflicts “with the tyrants.” (The “tyrants” were the dictators who ruled over many Muslim-majority countries.)

While the mujahideen had some successes, according to Wuhayshi, they were “besieged” by the tyrants until they found some breathing room in Afghanistan. The “sheikhs” studied this situation in meetings held in Kabul and Kandahar, because they wanted to understand why the jihadists were not victorious. And bin Laden concluded they should fight “the more manifest infidel enemy rather than the crueler infidel enemy,” according to a translation obtained by The Long War Journal. Wuhayshi explained that the former was the “Crusader-Zionist movement” and the latter were the “apostates” ruling over Muslims.

While waging war against the “apostate” rulers was not likely to engender widespread support, no “two people” would “disagree” with the necessity of fighting “the Jews and Christians.” If you fight the “apostate governments in your land,” Wuhayshi elaborated, then everyone – the Muslim people, Islamic movements, and even jihadists – would be against you because they all have their own “priorities.” Divisions within the jihadists’ ranks only exacerbated the crisis, as even the mujahideen in their home countries could refuse to fight.

Wuhayshi then cited Abu Muhammad al Maqdisi, a prominent pro-al Qaeda ideologue, who warned that the “capability” to wage “combat” in Muslim-majority countries did “not yet exist.” So, for instance, if al Qaeda launched a “jihad against the House of Saud,” then “many jihadist movements” would oppose this decision. Al Qaeda’s fellow travelers would protest that they were “incapable” of defeating the Saudi government. And these jihadists would complain they did not want to “wage the battle prematurely,” or become entangled “in a difficult situation.”

For these reasons and more, according to Wuhayshi, bin Laden decided to “battle the more manifest enemy,” because “the people” would agree that the US “is an enemy” and this approach would not sow “discord and suspicion among the people.” Bin Laden believed that the “Islamic movement” would stand with al Qaeda “against the infidels.”

Wuhayshi’s explanation of bin Laden’s reasoning confirms that attacking the US was not al Qaeda’s end goal. It was a tactic, or a step, that bin Laden believed could unite the jihadists behind a common purpose and garner more popular support from “the people.”

Not all jihadists agreed with bin Laden’s strategy. In February 1998, bin Laden launched a “Global Islamic Front for Waging Jihad Against the Jews and Crusaders.” Wuhayshi claimed that a “majority of the groups agreed to” the initiative, but some, like the Libyan Islamic Fighting Group (LIFG), opposed it. (However, some senior LIFG members were folded into al Qaeda.)

Gamaa Islamiya (IG), an Egyptian group, initially agreed to join the venture, but ultimately rejected it. As did other groups in the Arab Magreb, according to Wuhayshi. (Some senior IG leaders remained close to al Qaeda and eventually joined the organization.)

In August 1998, just months after the “Global Islamic Front” was established, al Qaeda struck the US Embassies in Kenya and Tanzania. According to Wuhayshi, bin Laden held a series of meetings around this time, as he sought to convince as many people as possible that attacking America was the right course. Some jihadists objected, believing it would ensnare them in a trap. But bin Laden pressed forward, telling those who didn’t agree that they wanted to fight “lackeys” without confronting “the father of the lackeys.” Al Qaeda’s path “will lead to a welcome conclusion,” Wuhayshi quoted bin Laden as saying.

The “initiative against the Crusaders continued” after the US Embassy bombings, Wuhayshi said, and the number of people who supported it increased “dramatically.” During this period, the “Global Islamic Front” launched operations against the “Crusaders” on the ground and at sea, but the idea to strike “from the air with planes” had not yet been conceived.

Wuhayshi traced the genesis of the 9/11 plot to both Osama bin Laden and Khalid Sheikh Mohammed (KSM), who would come to be known as the “mastermind” of the operation.

But he also credited Abdullah Azzam for popularizing the concept of martyrdom in the first place. Azzam was killed in 1989, but is still revered as the godfather of modern jihadism. After the mujahideen had defeated the Soviets in Afghanistan, they considered “hitting the Americans,” Wuhayshi claimed. Azzam “spoke harshly about the Western military camp.” Azzam also “introduced” the jihadists to a “new tactic.” Wuhayshi recommended that people listen to Azzam’s “final speech,” in which he reportedly said: “God gave me life in order to transform you into bombs.”

Years later, on Oct. 31, 1999, bin Laden watched as the co-pilot of EgyptAir Flight 990 crashed the jet into the Atlantic Ocean, killing more than 200 people on board. Bin Laden, according to Wuhayshi, wondered why the co-pilot didn’t fly the plane into buildings. After this, Wuhayshi claimed, the basic idea for 9/11 had been planted in bin Laden’s mind.

In reality, the EgyptAir crash came after the outline of the 9/11 plot had been already sketched. For instance, the 9/11 Commission found that KSM “presented a proposal for an operation that would involve training pilots who would crash planes into buildings in the United States” as early as 1996. “This proposal eventually would become the 9/11 operation.” In March or April 1999, according to the Commission’s final report, bin Laden “summoned KSM to Kandahar…to tell him that al Qaeda would support his proposal,” which was referred to as the “planes operation.”

Indeed, Wuhayshi recounted how KSM and his nephew, Ramzi Yousef, plotted to attack multiple airliners in the mid-1990s. In the so-called Bojinka plot, KSM and Yousef even conceived a plan to blow up as many as one dozen airliners. Wuhayshi recalled how Yousef placed a bomb on board one jet as part of a test run. Their plot failed and Yousef was later captured in Pakistan. Yousef has been incarcerated for two decades after being convicted by an American court for his role in Bojinka and the 1993 World Trade Center bombing. Wuhayshi prayed for his release.

Wuhayshi told a story that, if true, means KSM had dreamed of attacking the US since his youth. When he was a member of the Muslim Brotherhood in Kuwait, KSM wrote a play in which a character “ponders how to down an American aircraft.” Wuhayshi claimed to have searched for this play online, but he and another “brother” failed to find it.

Still, Wuhayshi insisted that KSM wrote the play, showing he was already thinking of ways to strike America as a young man.