Senator Marco Rubio appears to be the only person really concerned about a Russian invasion of Ukraine. While CIA Director Bill Burns took a delegation to Moscow for what is said to be high level meetings, it has proven to be ineffective in altering Russian operations versus Ukraine.

As usual we have this –>The Ukrainian Defense Ministry sent a release saying that about 90,000 Russian troops are stationed close to the border in areas east of the country controlled by rebel forces. This comes two days after Ukraine denied that Russian military personnel were in the area.

Eastern Ukraine has been a contentious area for years. In 2014, Moscow annexed the Crimean Peninsula shortly after the Ukrainian Revolution. Over 14,000 people have died as a result of the conflict.

Russian officials said the troops were present due to maneuvers. Kremlin spokesman Dmitry Peskov said that “Russia maintains troops presence on its territory wherever it deems necessary.”

The ministry’s statement said specifically that units of the Russian 41st army have remained in Yelnya, about 260 kilometers (about 160 miles) north of the Ukrainian border.

Ukrainian media reported however that Zelenskyy’s office was behind the resignation of Taran and four other ministers, who were also dismissed by parliament on Wednesday.

Russia has cast its weight behind a separatist insurgency in Ukraine’s east that erupted shortly after Moscow’s 2014 annexation of Ukraine’s Crimean Peninsula.

A massive buildup of Russian troops in Russia’s west have been fueling fears of an escalation of large-scale hostilities.

Russian officials said that the troops were deployed as part of measures to counter security threats posed by the deployment of NATO forces near Russian borders. Russia and the alliance also have blamed each other for conducting destabilizing military exercises near the borders. 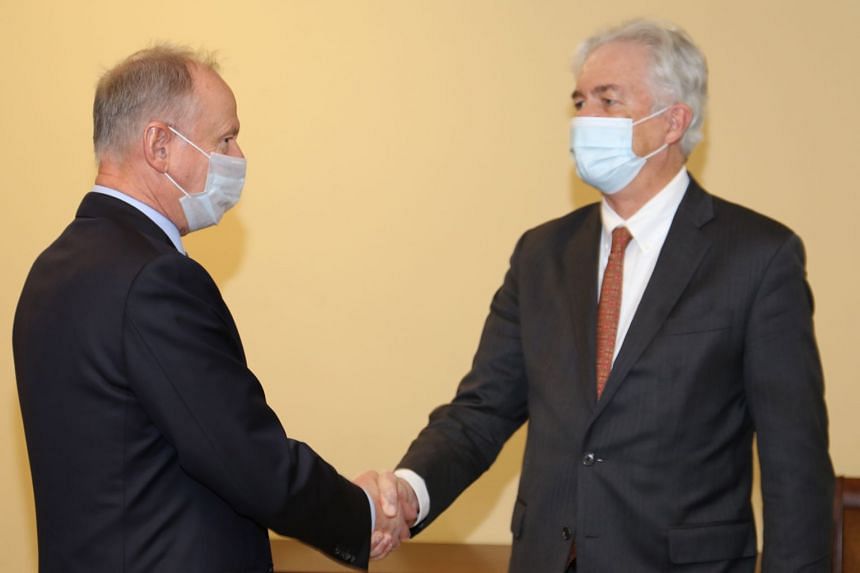 The CIA and the delegation came back empty handed it seems.

THE DIRECTOR OF THE United States Central Intelligence Agency has returned to Washington from a surprise visit to Russia, where he led a high-level team of American officials in meetings with their Russian counterparts. The two-day visit was announced almost simultaneously by both the American and Russian governments, following the arrival of the CIA director, William Burns, to Moscow on Tuesday.

Little information has emerged about the participants in the meetings. A statement from the American embassy in Moscow said simply that Burns had traveled there at the request of President Joe Biden, and that other United States officials had traveled with him. It is believed that Karen Donfried, the State Department’s assistant secretary for European and Eurasian Affairs, traveled with Burns. According to the American embassy, the meetings were held on Tuesday and Wednesday and concerned “a range of issues in the bilateral relationship between the United States and Russia.

A minute-long video, which was posted on social media by the Russian TASS news agency on Tuesday, showed a group of five American officials meeting with five Russian officials. The latter appeared to include Nikolai Patrushev, a close political ally of Russian President Vladimir Putin, who heads the Security Council of Russia —a body that is roughly equivalent to the United States National Security Council. Prior to his current role, Patrushev served as director of the Russian Federal Security Service (FSB).

It is worth noting that Burns speaks Russian and served twice as a diplomat in Russia, most recently as the American ambassador there. Some observers noted that Burns’ trip to Moscow is part of a broader pattern of increasingly frequent meetings between American and Russian officials in recent months. The last four months have seen at least four visits to Russia by senior officials in the Biden administration.