Motherboard: A much-discussed research paper out of Oxford this month concluded that millions of tweets about the presidential election are generated by highly automated Twitter accounts. According to the authors’ analysis, about a third of pro-Trump traffic, and one fifth of pro-Clinton tweets, is “driven by bots and highly automated accounts.”  Read more...

While there is the matter of Hillary and Bill with the Morocco thing, we cannot dismiss lil miss Michelle Obama and her relationship with the King as noted in the summer of 2016.

King Mohammed VI hosted an iftar meal in honor of the First Lady of the United States, Michelle Obama, on Tuesday night in Marrakech. 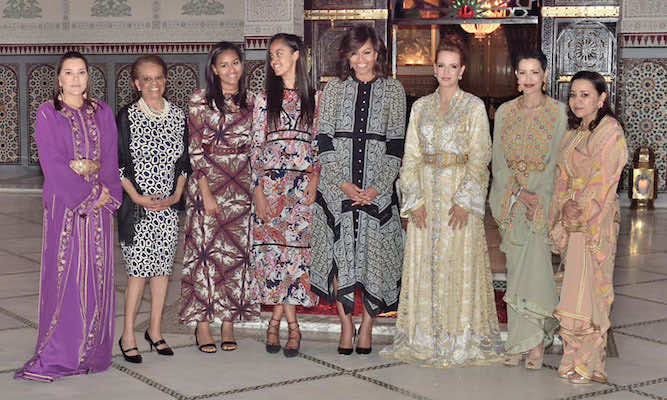 Using vague words, twisting sentences and altering priority of facts is all part of damage control within the Hillary inner circle.  Read more...

We cant predict who will be part of her cabinet staff, but given those who worked in the White House during Bill Clinton’s administration and now for the Hillary campaign,  you can bet it will be similar chaos and creepy people.

So, given those that are part of Hillary’s public campaign team and her clandestine operations team let us examine some names and the additional histories of these people. Note, how these people are recycled from decades of socialist political beltway occupation.  Read more...

OK with me.
From: Marissa Astor <marissa.astor@gmail.com<mailto:marissa.astor@gmail.com>>
Date: Tuesday, March 17, 2015 at 4:39 PM To: Jennifer Palmieri <jennifer.m.palmieri@gmail.com<mailto:jennifer.m.palmieri@gmail.com>>, Robby Mook <robbymook2015@gmail.com<mailto:robbymook2015@gmail.com>>, Philippe Reines <pir@hrcoffice.com<mailto:pir@hrcoffice.com>>, Huma Abedin <huma@hrcoffice.com<mailto:huma@hrcoffice.com>>, John Podesta <john.podesta@gmail.com<mailto:john.podesta@gmail.com>>, “hsamuelson@cdmillsgroup.com<mailto:hsamuelson@cdmillsgroup.com>” <hsamuelson@cdmillsgroup.com<mailto:hsamuelson@cdmillsgroup.com>>, Cheryl Mills <cheryl.mills@gmail.com<mailto:cheryl.mills@gmail.com>>, Joanne Laszczych <jlaszczych@cdmillsgroup.com<mailto:jlaszczych@cdmillsgroup.com>>, Eryn Sepp <eryn.sepp@gmail.com<mailto:eryn.sepp@gmail.com>>, NSM <nmerrill@hrcoffice.com<mailto:nmerrill@hrcoffice.com>>, Jacob Sullivan <Jake.sullivan@gmail.com<mailto:Jake.sullivan@gmail.com>>
Subject: Fwd: NYT |
Email Content Responding from my gmail as I’m having iCloud email issues. Can folks get on the phone at 5:15pm today? ———-
Forwarded message ———-
From: Robby Mook <robbymook2015@gmail.com<mailto:robbymook2015@gmail.com>>
Date: Tue, Mar 17, 2015 at 4:31 PM
Subject: Fwd: NYT | Email Content
To: Marissa Astor <marissa.astor@gmail.com<mailto:marissa.astor@gmail.com>> ———- Forwarded message ———- From: Jennifer Palmieri <jennifer.m.palmieri@gmail.com<mailto:jennifer.m.palmieri@gmail.com>>
Date: Tue, Mar 17, 2015 at 4:06 PM Subject: Re: NYT | Email Content
To: Robby Mook <robbymook2015@gmail.com<mailto:robbymook2015@gmail.com>>, Marissa Astor <marissa.astor@icloud.com<mailto:marissa.astor@icloud.com>>
Praise Jesus. Please do, Marissa.
On Tue, Mar 17, 2015 at 4:04 PM, Robby Mook <robbymook2015@gmail.com<mailto:robbymook2015@gmail.com>> wrote: Agree Marissa can sched if you need On Mar 17, 2015, at 4:03 PM, Jennifer Palmieri <jennifer.m.palmieri@gmail.com<mailto:jennifer.m.palmieri@gmail.com>> wrote: +
Robby and John Strikes me as a big problem that the NYT is having selected emails leaked to them and I I think we should do a call to discuss the proper way to handle. On Tue, Mar 17, 2015 at 3:39 PM, Philippe Reines <pir@hrcoffice.com<mailto:pir@hrcoffice.com>> wrote: There’s a lot to respond to here, but first and foremost the premise is wrong. There is nothing wrong with anyone having personal email addresses or her emailing someone’s private account or vice versa. Maybe she was wishing Jake a happy birthday. Or I was sending her a note about her mom. Or she asking Monica about Oscar disappearing. We’re allowed to have personal lives. Second, it was her practice, as well as ours, to conduct work on the .gov system. In those cases we didn’t, which could have been for any reason, including State.gov<http://State.gov> being down. In those cases the onus is on us to make sure that anything that should have ended up in the right place did. Now, depending on what they are looking at, you can’t easily determine if that happened. They are looking at HER email, not ours. They don’t know what next step we took. The most important thing to ascertain from State is whether they are looking at specific email from the “300” – because in those cases Heather and I went one by one to determine if a) it needed to end up on .gov, and b) it did indeed end up there. Since there are less than a dozen instances of this in the 300 it was easy. One is me sending her a clip, no commentary. Another is her emailing me & Huma about something that I subsequently followed up on my .gov account. We did that for each and could share that if need be. If they’ve somehow seen some of the other 55k, we’d need to see each to determine what they were. Lastly, we should warn Monica. Huma, unless you want to Nick or I can.
From: Nick Merrill Sent: Tuesday, March 17, 2015 3:13 PM
To: Jennifer Palmieri; Cheryl Mills; Philippe Reines; Heather Samuelson; Huma Abedin; Jacob Sullivan
Subject: NYT | Email Content Here is the story that I mentioned hearing from State about over the weekend. Specific questions are below. Jen when we talked over the weekend you noted that it was fairly irresponsible for them to cherry pick leaked emails and write it up as representative. And some of the questions below are a little ridiculous to say the least. I’ll call State now and see what they know and report back. I also asked what their deadline was. Nick
From: <Schmidt>, Mike Schmidt <schmidtm@nytimes.com<mailto:schmidtm@nytimes.com>>
Date: Tuesday, March 17, 2015 at 2:53 PM To: NSM <nmerrill@hrcoffice.com<mailto:nmerrill@hrcoffice.com>> Subject: emails Nick, We’re preparing a story on how Mrs. Clinton’s top advisers at the State Department used their private email accounts for some of their email correspondences with her. We’ve learned that Huma Abedin, Cheryl Mills, Philippe Reines, Jake Sullivan and Monica Hanley, used personal email accounts to correspond with her on her personal account. She also corresponded with Sidney Blumenthal about inside information he had about Libya. We have the following questions for our article: Why did the advisers use private email accounts – instead of government ones – to correspond with Mrs. Clinton? Was this the normal practice? Why did Mrs. Clinton suggest that her emails were being captured in the State Department system when she was corresponding at times with her aides on their personal accounts? Were Mrs. Clinton’s advisers given legal advice about whether it was appropriate for them to correspond with her using their personal accounts? Why did Mrs. Clinton rely on the advice of Sidney Blumenthal? — Marissa E. Astor marissa.astor@gmail.com<http://marissa.astor@gmail.com> (301) 613–3675
**** Then we have Dallas, Texas:

Observer: In Washington, D.C., many things start with words printed on congressional letterhead. Earlier this year, 64 GOP members of Congress asked the IRS to investigate why the foundation can keep its nonprofit status. The letter includes “media reports” claiming pay-to-play relationships between former President Bill Clinton, who received large speaking fees, and decisions made by Hillary Clinton to approve choices that benefited foundation donors. The sources of these reports range from The New York Times to hit-piece investigative books.  Read more...