The left’s heads are already exploding on that one and yet the White House is seriously considering the offer.

A major invitation has been presented by Poland to the United States that includes an investment by Poland of $2 billion for a U.S. military base in the country. Poland wants more arms and they are launching more advanced military projects. The threat to Poland? Yuppers….Russia. 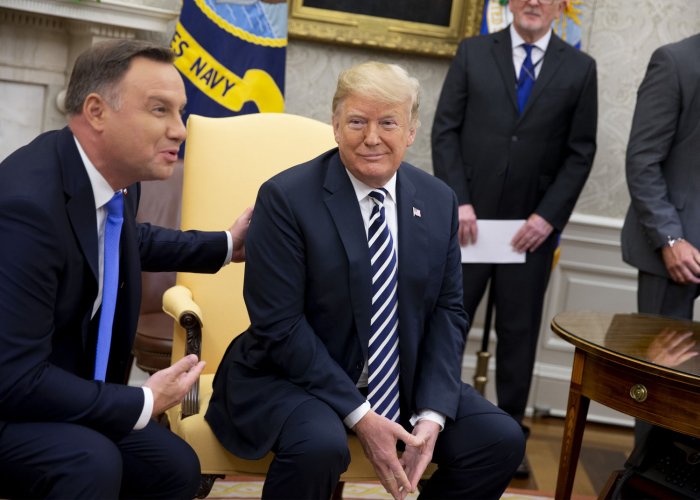 President Andrzej Duda, of Poland visited the White House to nurture and advance the relationship between the two countries. The offer and investment to/for the United States was made last May and there is major urgency given the annexation of Crimea and the constant aggression of Russian in the whole region. Poland by the way has been paying more that the required share, which is 2% of GDP to NATO.

Beyond just a military base, Poland is including hospitals, schools and gyms for all military personnel and families. The formal offer was made to the United States Congress. The Defense Minister for Poland has made an official visit to the U.S. previously to make this offer and joint military policy.

Meanwhile, it was just a few days ago that Secretary of Defense Mattis condemned Russia for doing influence peddling in Macedonia. Russia is meddling in the voting and election process in Skopje. Pro-Russian groups have been dispatched to Macedonia to even plant the seed of Macedonia changing the name of the country to North Macedonia….huh really?

Yes, and Russia has swooped into Macedonia with major disinformation campaigns and the U.S. has given the tiny country $5 million in security assistance annually for decades.

Further, the joint military games between China and Russia have alarmed many countries including the United States where the Air Force is taking an aggressive posture.

Air Force Secretary Heather Wilson on Monday called for growing the Air Force from its current size of 312 operational squadrons to 386 by 2030, as it prepares for a possible conflict against a major nation such as China or Russia.

This 24 percent increase in squadrons is the centerpiece of the service’s “Air Force We Need” proposal, which has been in the works for six months. This proposal seeks to lay out what it would take for the Air Force to fight a peer adversary and win, as well as defend the homeland, provide a credible nuclear deterrent, counter a medium-sized rogue nation that might try to take advantage of the Air Force’s focus on the major adversary, and fight violent extremists such as the Taliban and the Islamic State.

This follows the National Defense Strategy that the Pentagon unveiled earlier this year, which is structured around the need to shift away from the violent extremist fight and instead focus on deterring or fighting nations with significant, well-developed militaries.

In her keynote address at the Air Force Association’s Air, Space, Cyber Conference, Wilson referenced the massive Russian military exercises launched last week, involving more than 300,000 of their troops, and China’s unveiling of its first aircraft carrier and its ongoing militarization of islands in the South China Sea to extend its long-range bombers’ reach.

“We must see the world as it is,” Wilson said. “That was why the National Defense Strategy explicitly recognizes that we have returned to an era of great power competition.”