Mohammed Haydar Zammar is obviously still an enemy combatant and under President Trump’s pledge, he would make full use of the detention center. Kurdish forces in Syria have detained a man who is believed to be a Syrian-born German jihadist suspected of recruiting some of the 9/11 hijackers to Al Qaeda, a senior Kurdish commander said.

The detainee, identified as Mohammed Haydar Zammar, who is his mid-fifties, was apprehended in northern Syria and was being interrogated, the commander told Agence France-Presse on Wednesday. His fate remained unclear.

The jihadist is best known for allegedly helping plan the Sept. 11, 2001, attacks in the U.S., the report said, including recruiting some of the hijackers to the terror group.

Zammar fled Germany after the attacks and relocated to Morocco, where he was soon arrested in an operation involving CIA agents.

He was later handed to Syrian authorities who, in 2007, sentenced him to 12 years in prison for being a member of the Muslim Brotherhood, according to German state broadcaster Deutsche Welle.

He was released from prison after the Syrian civil war broke out in the region and most hardline jihadists and Islamists were released. Zammar, among many others, is believed to have joined the Islamic State group.

The Kurdish official didn’t say if Zammar has been actively engaged in fighting for the terror group in Syria.

The Pentagon hasn’t yet confirmed the suspect’s capture, but reportedly said it was looking into it.

Zammar, a German citizen, was born in Syria. At ten he moved to Germany with his family. Even among his very religiously conservative family, Mohammed Zammar impressed many with his extreme devotion at an early age. He became well-known at many of the mosques in Hamburg, Germany. While still in high school, Zammar began to be associated with Jihadists through Mamoun Darkazanli, a fellow Syrian and al-Qaeda financier.

Zammar attended a metalworking college and planned to work for Mercedes-Benz. He worked as a translator in Saudi Arabia, and then took a job as a truck-driver back in Hamburg. But in 1991, he decided to make jihad his full-time job.

He flew to Afghanistan by way of Pakistan and underwent a training program for mujahideen fighters. His training included weapons knowledge, use of explosives, and advanced tactics. He performed well and was moved to an elite training camp near Jalalabad. By the end of the year, he had “graduated” and returned to Hamburg.

Zammar travelled extensively over the next few years. While working as a mechanic, he took long trips to Syria, Jordan, Turkey, and Sweden. In 1995, he traveled to Bosnia to fight there. And in 1996, Zammar visited Afghanistan for a second time, this time to become a formal member of the group called al-Qaeda. He was reported to have been personally invited by Osama bin Laden. More here.

Meanwhile, beyond al Qaeda and Islamic State in Syria, a new terror group is finally named and identified. The original AUMF still applies.

A new and dangerous extremist group spawned from al Qaeda is consolidating power in northwestern Syria, while the U.S. has focused on fighting remnants of Islamic State elsewhere in the country and striking the Assad regime’s chemical-weapons facilities.

Since surfacing as the country’s most potent militant group, Hayat Tahrir al-Sham has battled Western-backed rebel groups to extend its control across Idlib province, enforcing its version of Shariah and raising funds by taxing flows of people and goods.

The group’s leader, Abu Mohammad al-Julani, a former al Qaeda fighter, has vowed to conquer Damascus and impose Islamic rule across Syria. in a January speech, he exhorted followers to engage in “a war of ideas, a war of minds, a war of wills, a war of perseverance,” according to the SITE Intel Group. 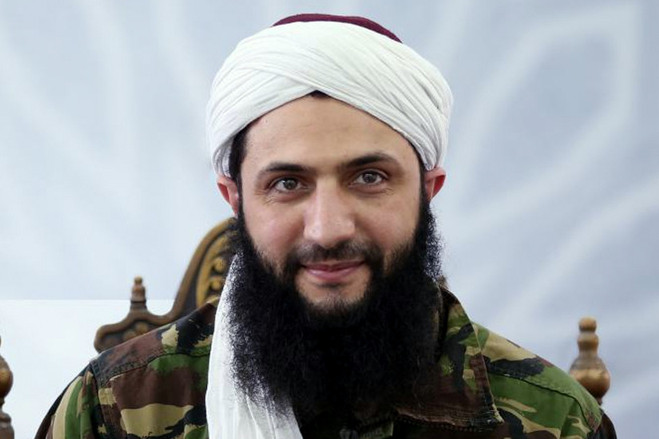 Abu Mohammad al-Julani, leader of Hayat Tahrir al-Sham, in a photo from 2016, when he headed a predecessor group, the Nusra Front. Photo: Associated Press

Thousands of fighters with the group—an offshoot of the Nusra Front, al Qaeda’s former Syrian affiliate—have dug in around Idlib, analysts say, as the U.S. concentrates on Syria’s other battles and moves toward what President Donald Trump has said would be a quick exit from Syria.

“The area seems to be out of focus for Western powers,” said Hassan Hassan, a Washington-based analyst with the Tahrir Institute for Middle East Policy, a think tank. “The jihadis are having a honeymoon there.” The group has also fought fiercely against adversaries. In February, after four months of fighting, it announced the surrender of Islamic State cells it defeated in Idlib. In March, it claimed the capture of about 25 villages in Aleppo and Idlib provinces, capturing tanks and armored vehicles.

This month, the group has been fighting Syrian government forces with artillery and snipers in Homs, Hama and Aleppo.

In areas under its control, Hayat Tahrir al-Sham has set up a religious police force similar to that of Islamic State, residents say. It initially rewarded children with sweets for memorizing the Quran, but soon moved to breaking hookah pipes as part of a smoking ban and ordering clothes shops to cover heads of mannequins. Beauty salons were told to ditch makeup, Idlib residents say.

In its propaganda, the group likens Syria to a frail ship that can be kept afloat only by Islamic rule of law. Shariah ensures that “the ship doesn’t sink,” goes a slogan of the group. Griping of shortages under its rule, residents retort: “There is no water, so the ship can’t sink.”

The group has jailed men and women who socialize without being related, residents say, and closed a university in the town of al-Dana late last year because it held mixed-gender classes. In the town of Saraqeb, where residents last year faced down threats from extremists and held the first direct elections in Syria since 1953, the group has seized control of the local council.

“Yes, we are a conservative society, but these actions are very extreme,” one young resident of Idlib said.

Compounding the anarchy in Idlib has been the recent arrival of nearly 50,000 people, including rebels, from Eastern Ghouta outside Damascus, the scene of a brutal crackdown by the regime of Bashar al-Assad.

The new arrivals have exacerbated a humanitarian crisis in Idlib, already home to about a million internally displaced Syrians. The poor conditions and lack of jobs has proved fertile ground for the recruiting efforts of extremist groups, which promise to pay anyone willing to fight for a living wage.

For now, the Syrian regime has been fixated on crushing smaller pockets of fighters, including with the suspected use of chemical weapons in Eastern Ghouta on April 7, an attack that killed dozens of civilians. But Damascus is now expected to eventually turn its attention to the high concentration of militants in Idlib in what could be as bloody a fight as the battle for Aleppo, which fell in 2016.

Mr. Trump had days before vowed a drawdown of U.S. troops, with Islamic State on the verge of defeat. After the weekend’s strikes his administration stepped up efforts to replace the U.S. military’s 2,000-strong contingent in Syria with troops from allied Middle Eastern countries.

U.S. troops in Syria are mostly focused on eastern Syria, joining Kurdish and other fighters battling the shrinking pockets of Islamic State militants. Turkey has been fixated on preventing a Kurdish militia that it considers terrorists from expanding on its southern border.

As a result, a hodgepodge of armed groups, many with extremist agendas, have thrived in Idlib, to the detriment of other forces opposing the Assad regime. “The space for moderate opposition continues to close in the northwest,” said a senior Western official who tracks Syria closely.

Hayat Tahrir al-Sham now seeks to control important administrative sectors across Idlib through a body it calls the Salvation Government, which generates revenue by charging residents for electricity and water. HTS also controls the Bab al-Hawa border crossing with Turkey.

“The Salvation Government tries to win people’s hearts by providing services,” one 27-year-old man in Idlib said. “At the same time, they try to dominate people.” Some have pushed back cautiously. University students attend classes in the open. Hospitals have threatened to close if the group interferes in their work. Among its many critics, Hayat Tahrir al-Sham is privately known as “Hitish,” an echo of the pejorative acronym “Daesh” that people disdainfully use for Islamic State.