The National Pulse can reveal the oft-described “non-partisan” Transition Integrity Project – an organization claiming to work to defend the integrity of America’s November elections – has links to former President Barack Obama, being funded by an organization led by Obama-era lawyers and over 20 Obama White House staff.

Bassin previously headed the far-left Avaaz network, founded in turn by the leftist MoveOn.org group, as well as the Truman National Security Project, which has featured lead Joe Biden policy advisor Jake Sullivan and Joe Biden’s son Hunter Biden on its board.

The revelations destroy the Transition Integrity Project’s central tenet: that it is a non-partisan and independent organization that simply seeks to secure the fair results of the upcoming election.

The group has previously attempted to claim that it “takes no position on how Americans should cast their votes, or on the likely winner of the upcoming election.”

The Transition Integrity Project (TIP) was first accurately reported on by The National Pulse in early August, after a slew of fawning media articles about a group which performed “war games” to predict what would happen in the case of a disputed election in November.

Despite claims of being non- or bi-partisan, The National Pulse exposed the group as a host of NeverTrump activists, partnered with Open Society Foundation staffers, and partnered in turn with Chinese Communist Party officials.

Now, following a trail of evidence left by the TIP’s new website, The National Pulse can report that the falsely labelled “non-partisan” project is in-turn financed by a group that was founded explicitly to oppose President Trump using false allegations of Russian interference, headed by President Obama’s former Associate White House Counsel.

The only other prior mention of the connection between the two groups came from former Michigan Governor turned CNN commentator Jennifer Granholm, who told anchors Jim Sciutto and Alisyn Camerota in July:

“…it’s called the Transition Integrity Project. There were 100 participants and, as you say, it was bipartisan, it’s sponsored by a non-partisan entity called Protect Democracy. And, honestly, Jim, it was — it was a real eye opener to many of us. It was pretty scary.”

Despite being a participant in the highly-partisan endeavor, CNN allowed Granholm to report, unchallenged, on the group wherein she falsely made the claim that Protect Democracy is “non-partisan.”

THE LINK TO OBAMA.

It was born in “early 2017” by “a group of former high-level executive branch officials who served in the White House Counsel’s Office and upper echelons of the Department of Justice” from the Obama administration.

The group boasts of the inclusion of marginal Republicans – all “Never Trumpers” including Mona Charen who was notoriously booed off of the Conservative Political Action Conference (CPAC) stage for attacking President Trump. But these former Republicans are window dressing for the organization which features a whopping 22 former Obama administration officials amongst its ranks. 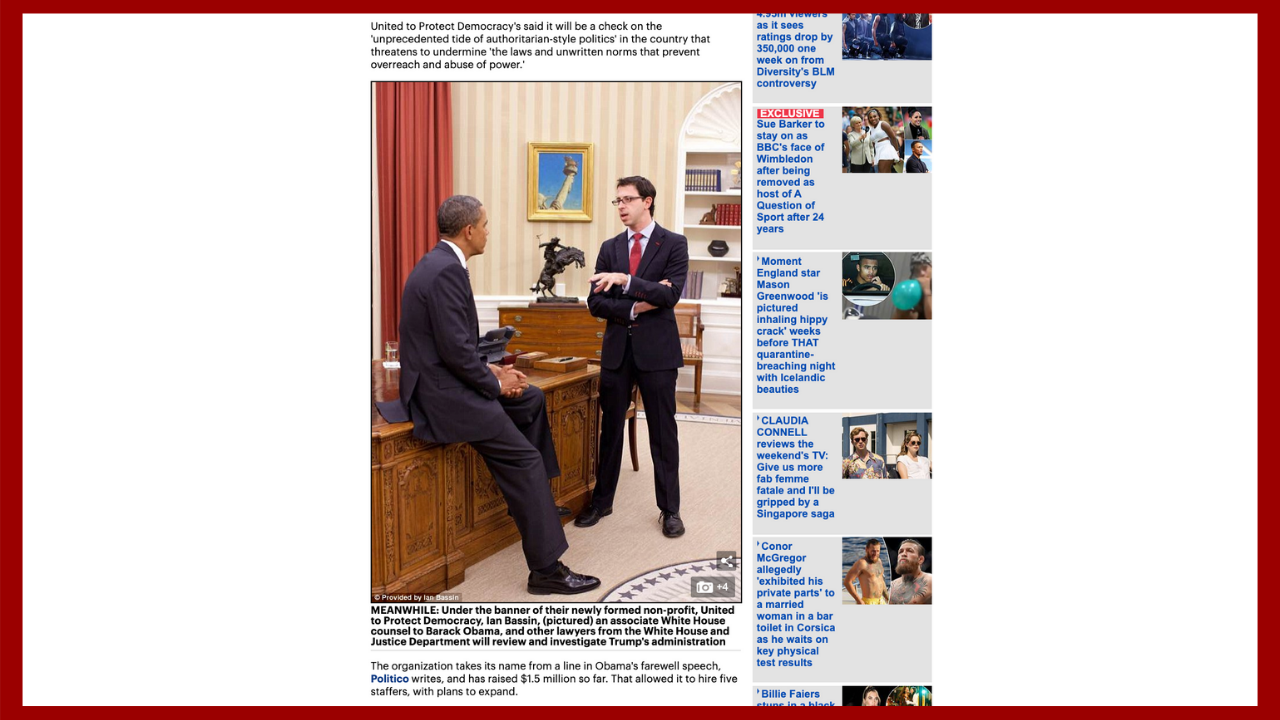 Prior to his stint in the White House, he was a member of the administration’s transition team and a Director of Florida Policy for President Obama’s 2008 campaign.

Bassin is a prolific critic of President Trump, comparing his supporters to neo-Nazis and demanding the federal government unduly “remove Trump from office.”

In addition to Bassin, the group counts 21 more individuals who worked in the Obama administration as staff, board members, or advisors.

Among the cohort are high-ranking officials such as Special Assistant to the President and Associate White House Counsel Michael Gottlieb, Solicitor General Donald Verrilli, and Senior Deputy Director of Operations and Director for Finance Beau Wright.

The group’s anti-Trump links, however, transcend affiliation with the Obama administration alone.

Instead, key figures in the globalist movement appear to be connected with PDP and therefore TIP.

Advisors to the group include a bevy of vocal Trump critics such as failed presidential candidate Evan McMullin and Anne Applebaum, who frequently decries the Republican party’s Trump-catalyzed shift towards populism and extols globalism.

Another globalist on the advisory board, Jerry Taylor, serves as President of the Niskanen Center, which has received hundreds of thousands of dollars from George Soros’s Open Society Institute. Niskanen often masquerades as a libertarian for the sake of media coverage, but has opposed the Trump presidency which has done more for libertarian anti-war causes than any President in four decades.

PDP’s sister organization “United to Protect Democracy” – which files its reports together with PDP – was first reported on by Politico following the Trump inauguration.

Reporter Edward-Isaac Dovere – who recently threw a soft ball question to candidate Joe Biden – lauded the arrival of the group, claiming it drew its name “from a line in President Barack Obama’s farewell address that urged his supporters to pick up where he was leaving off.”

The organization’s recently filed 990 forms reveal Bassin and other staff making six-figure salaries as a result of their efforts which appear to amount to filing Freedom of Information Act requests, and supporting entities like TIP.

On the same day as the Politico article, the Daily Mail published a story linking the PDP’s operations to another ex-Obama official refuge known as The Moscow Project. The Moscow Project would go on to promote the false Russia hoax with the assistance of the establishment press.

The article by Francesca Chambers – now a board member at the White House Correspondents’ Association – reads like a PDP press release, stating: “Bassin’s organization is also preparing for the ‘worst-case scenario’ – that Trump would deny a judge’s order and create a constitutional crisis.

“The White House has not suggested that it intends to override the judicial branch, despite Trump’s smackdown of a so-called judge who rule [sic] against him, but should it move in that direction, United to Protect Democracy will be ready.”

The uncovered money trail is yet another blow to the group’s facade of bipartisanship and neutrality in addition to its founder Rosa Brooks vowing she’d do “every legal and ethical thing within her power” to elect Democratic presidential candidate Joe Biden.

The bottom of the group’s website, which was quickly pulled down after it went up last week, reads “Transition Integrity Project is funded by United to Protect Democracy.”

Insistent American democracy is “in danger,” left-wing United to Protect Democracy insists “Trump is a symptom, not a cause” of the phenomenon before branding him an “autocratic” leader.

“Donald Trump poses an immediate, acute, and extreme threat to our democracy that must be blunted,” the group, named after a phrase from Obama’s farewell address, promises.

The Transition Integrity Project has previously been exposed for its links to George Soros’s Open Society Institute, as well as the Chinese Communist Party-linked Berggruen Institute.

Rosa Brooks, the ex-Soros lawyer ostensibly in charge of TIP, once offered “substantive help” to the Hillary Clinton campaign, as well as liaising with John Podesta and Biden advisor Jake Sullivan.

Posted in DOJ, DC and inside the Beltway.