In his annual state-of-the-nation speech on Wednesday, President Vladimir V. Putin of Russia shook up the country and its political class by calling for constitutional changes that would give him a new path to holding onto power after his current — and, in theory, last — term ends in 2024.

With that, the entire cabinet, led by a long-serving Putin ally, Prime Minister Dmitri A. Medvedev, abruptly resigned. The head of the Federal Tax Service, Mikhail V. Mishustin — a little-known but skilled technocrat — will become the next prime minister.

The spate of moves offers some clues about Mr. Putin’s plans and priorities, but also raises questions about what may lie ahead for the Russian president. Here are answers to some of them. 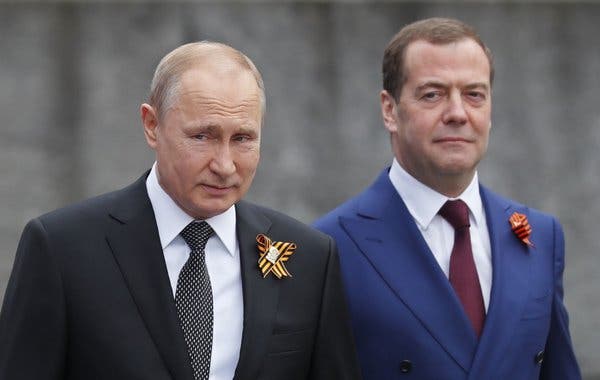 What is Putin doing?

Mr. Putin’s hold on power in Russia is unrivaled, built up over the last 20 years in his posts as president and prime minister.

But Russia’s Constitution bars a president from serving more than two consecutive terms. To maintain his grip on power, as he has hinted he intends to do, Mr. Putin needs to find a way to engineer a leadership transition that will allow that to happen.

To that end, it appears, he has proposed changes to the Constitution that would weaken the presidency while increasing the sway of the Parliament and the prime minister.

He said, for example, that the president should in the future be required to accept the prime minister’s cabinet appointments. This and other changes could give Mr. Putin more leeway to find a position in which he can maintain power without violating the Constitution.

What position will he hold?

Mr. Putin could become prime minister again, taking advantage of the position’s expanded influence. Alternatively, some analysts have pointed to a leadership maneuver engineered by Nursultan Nazarbayev, the longtime president of Kazakhstan, another former Soviet republic.

In 2018, Mr. Nazarbayev increased the power of Kazakhstan’s Security Council and made himself its chairman for life. When he resigned from the presidency last year in favor of a handpicked successor, his position at the helm of the Security Council allowed him to hold on to key levers of power.

On Wednesday, offering few details, Mr. Putin dangled the possibility of a similar move in Russia. The State Council — currently an advisory body made up of the governors of Russia’s regions — should have its “status and role” fixed in the Constitution, he said.

That quickly raised speculation among Russian political analysts that a revamped State Council could become a vehicle for Mr. Putin to maintain power if he relinquishes the presidency, particularly over the military and foreign policy.

Why doesn’t he just seize power?

Despite Mr. Putin’s immense sway, he’d be taking a risk if he simply declared himself president for life.

Mr. Putin served two consecutive presidential terms from 2000 to 2008, and then became prime minister. His announcement in 2011 that he would seek the presidency again, followed by parliamentary elections widely seen as rigged, helped trigger Russia’s biggest street protests since the 1990s.

This time around, Mr. Putin looks determined to orchestrate his next move in a slow-motion fashion that’s less likely to produce a backlash. The changes to the Constitution he called for give him several options to hold on to power — while affording him as much as four years’ time to set his course.

Is he really worried about public opinion?

“Our society is clearly calling for change.” Mr. Putin said at the beginning of his speech on Wednesday.

Indeed, over the last year, Russia has seen its most vigorous street protests since the anti-Putin rallies of 2011 and 2012.

Polls show that Russians increasingly distrust pro-Kremlin TV channels and are getting their news on the internet, which remains largely uncensored.

And the Kremlin’s appeal to patriotism — so effective after Mr. Putin’s annexation of the Ukrainian peninsula of Crimea in 2014 — has lost its visceral power, overshadowed by Russia’s economic problems.

All of this means that the Kremlin is likely to portray the resignation on Wednesday of Mr. Medvedev and every cabinet minister as a sign that Mr. Putin has heard Russians’ demand for change.

While Russians do increasingly blame Mr. Putin for their ills, many more blame the bureaucrats below him. Mr. Putin’s approval rating has fallen to 68 percent from 82 percent in April 2018, an independent pollster, Levada, says. But Mr. Medvedev is in far worse shape, with an approval rating of 38 percent.

What about his new prime minister?

Mr. Putin’s choice of Mr. Mishustin seems to reflect his concerns about Russia’s declining standard of living, which has contributed to spasms of unrest over the last year.

Mr. Mishustin is widely seen as one of Russia’s most effective technocrats. He has headed Russia’s Federal Tax Service since 2010, modernizing a notoriously ineffective and corrupt tax-collecting system. The Financial Times dubbed the computerized, real-time approach to taxation he developed as “the taxman of the future.”

In his early years as president, Mr. Putin built his popularity on soaring living standards, which coincided with a period of rising oil prices. But with lower oil prices and Western sanctions, those steady improvements are now a thing of the past. Disposable incomes are still effectively below what they were in 2013.

Mr. Putin also used his state-of-the-nation speech to make a raft of pledges to improve Russians’ daily lives. For example: free hot meals for all elementary school students from grades one through four.

Unlike Russia’s more prominent economic reformers, the 53-year-old Mr. Mishustin has no political base of his own, reducing the likelihood that he might use the powers of his new office to chip away at Mr. Putin’s authority.

Could he be loosening his grip?

In theory, at least, Russia’s system of governance echoes that of France — a powerful presidency checked by an independent judiciary, by parliament and by a cabinet of ministers headed by a prime minister with his own locus of authority.

But Mr. Putin has steadily subsumed the authority of all those institutions, often justifying crackdowns on political pluralism as necessary in the face of external threats. He reprised that language in his speech on Wednesday, signaling that no political thaw is in the offing.

“Russia can be and can remain Russia only as a sovereign state,” he said.

That was an allusion to Mr. Putin’s frequent charge the West is fomenting political opposition to undermine Russian sovereignty.

To drive home the point, Mr. Putin proposed a constitutional amendment that offered the day’s clearest statement of how he views his successor: Russia’s future president, Mr. Putin said, may not ever have had citizenship or permanent residency in another country.