In part: Iran’s supreme leader, Ayatollah Ali Khamenei, led Friday prayers in Tehran for the first time in eight years and delivered a sermon in which he excoriated U.S. leaders as “clowns” and accused European countries of negotiating in bad faith over the foundering nuclear deal.

Khamenei also indicated that Iran might retaliate further for the U.S. drone strike that killed top Iranian commander Maj. Gen. Qassem Soleimani, saying a missile attack on U.S. assets in Iraq had been a blow to America’s dignity and its status as a superpower.

The address comes at a delicate time for the ayatollah. Iran’s leaders are locked in a contentious dispute with the U.S., and they’re facing public criticism at home after admitting that Iran accidentally shot down a Ukrainian passenger jet, killing 176 people, most of whom were Iranian.

Taking aim at recent statements by President Trump and Secretary of State Mike Pompeo in which they pledged their support for Iran’s regular citizens, Khamenei said, “These American clowns lie in utter viciousness that they stand with the Iranian people.”

Khamenei added, “They lie. If you are standing by the Iranian [people], it is only to stab them in the heart with your venomous daggers.”

Despite the ayatollah’s colorful language, as NPR’s Jane Arraf reports, his overall speech was “perhaps a little bit less fiery than many would have expected.” While the Iranian leader did criticize the U.S. and its allies, she says, “he did not make specific threats.”

In his sermon, the ayatollah also addressed a recent maneuver that could lead to the reinstatement of U.N. sanctions on Iran: the complaint filed Tuesday by foreign ministers of the U.K., France and Germany. Their formal accusation that Iran violated its commitments under the 2015 nuclear deal, known as the Joint Comprehensive Plan of Action, triggers a dispute resolution process — and if that fails, U.N. sanctions on Iran, including an arms embargo, will likely return.

“The threat of the French and German governments and the vicious British government to send Iran’s case to the Security Council proved once again that they are the footmen of the U.S.,” Khamenei said.

So, what is planned and what should our forces and civilian government employees be prepared for?

*** ISW: Iran is preparing to increase political pressure against the U.S. presence in Iraq by generating significant anti-American protests on Friday, January 24 with support from nationalist Shi’a cleric Moqtada al-Sadr. Iran seeks to integrate Sadr into a new “resistance front” that aligns Iranian proxy groups with Sadr’s popular influence to expel U.S. forces. Sadr has thus far supported this effort but retains freedom of action and will continue to support popular protests against the Iraqi state, which Iran views as a severe threat. 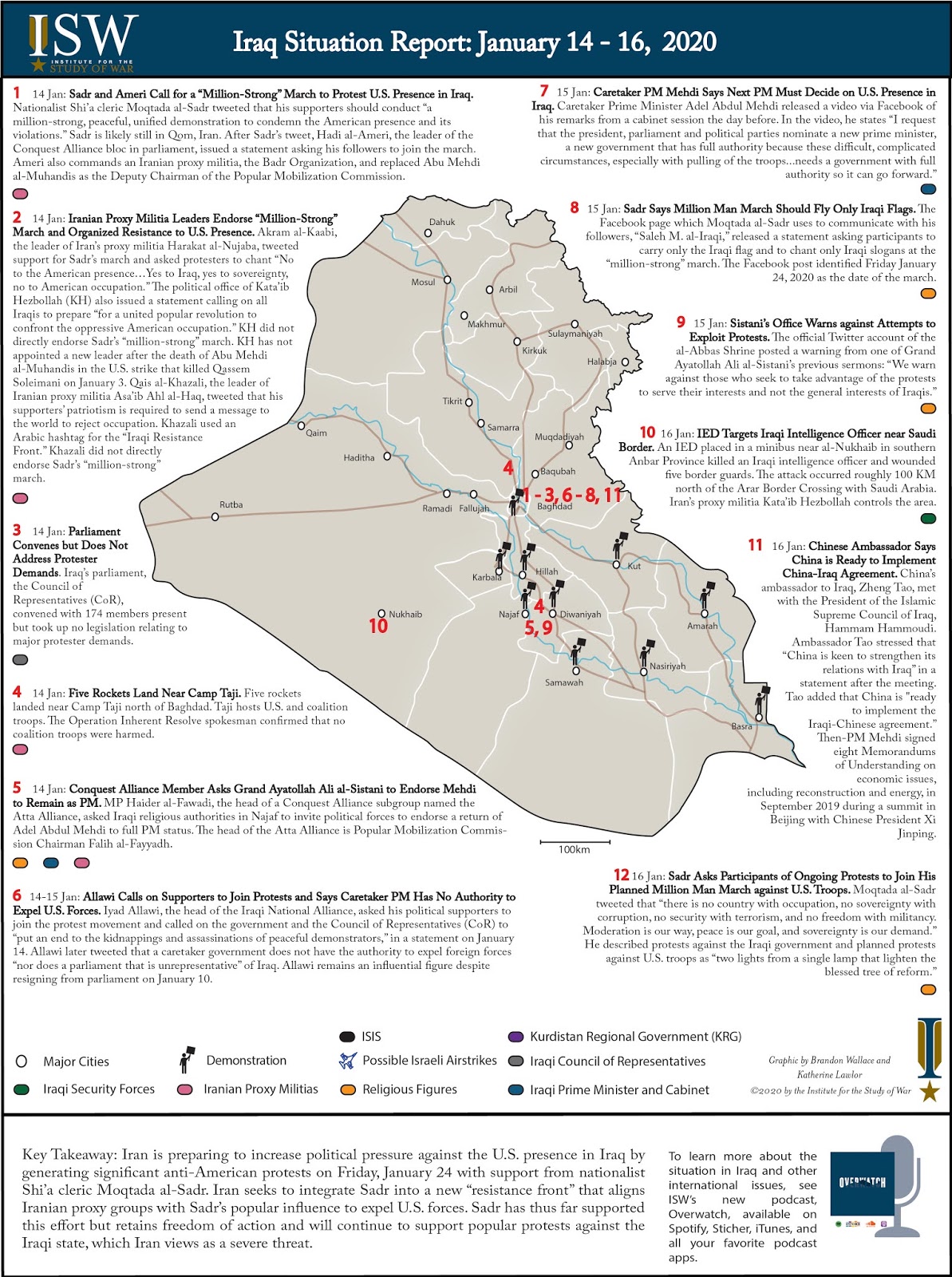 Sadr’s new resistance front (as he enhances relations with Tehran) includes a million man march against US forces in Iraq. Further, he condemned the Iraqi Parliament resolution as a weak response calling for the cancellation of the security agreement with the United States. Last Sadr held meetings with the PMF/Hashd al Shaabi and with Kataib Hezbollah, Asaib Ahl al Haq, led by terrorist Qais al Khazali and Hezbollah al Naujabas Brigades in Qom where he listed a number of demands of the Baghdad government and calls to action.

Coordination, mobilization and locations are still being determined. It could happen in just Baghdad or throughout the country with Iran Shiite support and funding.