ABC: The suspected gunman in an attack on police officers in Dallas — which left five cops dead and seven injured — had bomb-making materials, ballistic vests and rifles in his house, police said.
The news from police came as police pieced together the background on the suspect, 25-year-old Micah Xavier Johnson, in the ambush-style shooting Thursday night.
Detectives are also analyzing information in a “personal journal of combat tactics” they recovered, Dallas police said.
Johnson, who was killed by police when they detonated a bomb delivered by robot, served as a U.S. Army reservist until April 2015. He was trained and served in the Army Reserve as a carpentry and masonry specialist, defense officials said.
Johnson, a private first class, was deployed to Afghanistan from November 2013 to July 2014, according to his service record.
Police said Johnson had no criminal history. Police said “others have identified him as a loner.”

Excellent work by:   Heavy: A gunman “upset about Black Lives Matter” and “recent police shootings” who opened fire Thursday night in Dallas in an attack on police officers has been identified as Micah X. Johnson, the Los Angeles Times and CBS News report.

Five police officers were killed and seven were wounded, officials said. Two civilians were also wounded in the shootings. Johnson, 25, was killed when a police robot detonated a bomb near him following a standoff that lasted several hours, Police Chief David Brown said Friday at a press conference.

“The suspect said he was upset with white people and wanted to kill white people, especially white officers,” Brown said.

It is not clear if there were any other gunmen, or whether other people taken into custody by police were involved in the shooting. Police initially said two snipers positioned themselves in triangulated locations to fire on officers from elevated positions.

The gunfire began just before 9 p.m. while a peaceful rally was held by the Black Lives Matter organization in response to recent controversial police killings of black men in Louisiana and Minnesota. The officers were fired upon by a gunman with a sniper rifle in an elevated position at times during the incident, officials said.

The gunman was then cornered in El Centro College in downtown Dallas.

Little is known about the gunman so far, and this post will be updated as more information is released. Here’s what we know so far about the suspected shooter and the tragic incident:

Warning: Some of the videos below may contain graphic content.

1. The Suspect Told Police He Was Not Affiliated With Any Groups & He ‘Did This Alone’

After the shootings in downtown Dallas, the gunman, identified as Micah Xavier Johnson, 25, holed himself up inside the El Centro College building in the downtown area of the city, Dallas Police Chief David Brown said at a press conference.

He told police he was “not affiliated with any groups,” and he said he “did this alone,” the chief said.

Sources told the Los Angeles Times that Johnson has no ties to terror groups and no known criminal history. He has lived in the Dallas area and has family members living in Mesquite, Texas, east of Dallas, the newspaper reports, citing federal law enforcement sources.

A black SUV was found at the scene registered to Delphene Johnson, who is Micah Johnson’s mother according to Facebook posts and public records, NBC Dallas-Fort Worth reports. Live helicopter video from the news station showed police at her home in Mesquite.

The suspect told police he was a U.S. Army Veteran, CBS News reports.

Johnson told police negotiators the “end is coming” and said he wanted to “kill more” officers, according to Brown.

Police said after several hours of negotiating and shooting at the officers, the suspect was killed by a bomb-wielding robot.

“We tried to negotiate for several hours, negotiations broke down, we had an exchange of gunfire with the suspect,” Brown said. “We saw no other option but to use our bomb-robot and place a device on its extension for it to detonate where the suspect was. Other options would have exposed our officers to grave danger. The suspect is a result of detonating the bomb.”

The suspect did not shoot himself, despite reports, Brown said.

An armored vehicle shot at officers and the Dallas Police headquarters early Saturday morning before leading police on a chase and into a standoff.

2. He Claimed There Were ‘Bombs All Over Downtown Dallas’ During Negotiations With Police

While he was barricaded in the hotel, the suspect told police there were bombs planted “all over” downtown Dallas, the city’s police chief said at a press conference.

Police have not said if any bombs or suspicious items have been found.

“He said we will eventually find the IEDs,” Police Chief David Brown said at a press conference.

The shooting came a year and a month after a man angry at police opened fire on the Dallas Police headquarters. He fired several shots at the building, but no one was injured. The man, James Boulware, was driving an armored van and was later chased down by police. He was killed during a standoff.

Boulware also claimed he had planted bombs in downtown Dallas.

3. Police Are Still Searching Until they Determine There Are No Outstanding Suspects, the Chief Said

Police are still trying to determine how many gunmen were involved in the attack. Chief David Brown said they will continuing searching and investigating until they can be sure no one is on the loose.

Brown said they want to ensure “that everyone associated with this tragic is brought to justice. … We won’t expand on any further on what other suspects we have interviewed or looked at or their status until we get further into this investigation and get closer to a conclusion of who are all involved.”

Police previously said two people were spotted getting into a Mercedes into downtown Dallas carrying camouflage duffle bags, the police chief said. The car was spotted by police and stopped on the highway. The people in the car were taken into custody. The chief said a woman was also arrested near El Centro College.

Police are not sure if any of those three people who are in custody are connected to the shooting.

One man who was marching during the protest, Mark Hughes, was incorrectly identified by police as a “person of interest” in the shooting, and his photo was distributed on Twitter by the department. Hughes was open carrying a rifle, which is legal in Texas, to exercise his Second Amendment rights, but he turned over the gun to a police officer after the shooting began so he would not be mistaken as a suspect. That moment was caught on video.

The man later turned himself in to police after his photo was distributed across social media and on national television. He was released after being questioned.

A 37-year-old Baton Rouge, Louisiana, man was fatally shot by police in an incident caught on video by a witness that has sparked protests in the city.

4. The Slain Officers Include 4 From the Dallas PD & 1 From the City’s Transit Authority Police

A second victim was identified by family members as Dallas Officer Patrick Zamarripa.

The other officers have not yet been identified publicly and Dallas Police Chief David Brown said they are working to notify families of the victims.

One wounded officer has been identified as DART Officer Misty McBride. She is expected to survive.

“Some of the bravest men and women you ever want to be associated with,” Brown said about the Dallas and DART police officers who responded to the shooting. “You see video footage after video footage of them running toward gunfire from an elevated position with no chance to protect themselves. And to put themselves in harms way to make sure citizens can get to a place of security.”

“So please join me in applauding these brave men and women who do this job under great scrutiny, under great vulnerability. Who literally risk their lives to protect our democracy. We don’t feel much support most days, let’s not make today most days. Please, we need your support to be able to protect you from men like these who carried out this tragic, tragic event. Pray for these families,” Brown said.

Officer Brent Thompson, the first slain officer shot in Dallas identified, had trained Iraqi and Afghan police. He was 43, and a DART officer.

A graphic video obtained by KDFW-TV shows a gunman opening fire on a police officer in Dallas Thursday night., shooting him in the back. Watch it here.

5. Police Took Part in the Planning of the Peaceful Rally & March, the Chief Says

The shootings came during a peaceful rally and march in response to two controversial police shootings of black men that occurred this week. The rally began at 7 p.m. and was set to end at 9 p.m. The shooting occurred just before 9 p.m.

Alton Sterling was fatally shot by two officers in Baton Rouge, Louisiana on Tuesday. A day later, Philando Castile was killed by police during a traffic stop in Falcon Heights, Minnesota. Parts of both shootings were caught on videos that spread quickly across social media. Investigations into both those shootings are ongoing and no officers have been charged.

Dallas Police Chief David Brown said he and others in the police department participated in the planning of the rally.

Officers were posing for pictures with marchers and the mood was peaceful and light, officials said.

Note the armband:  The red, black, and green Pan-African flag designed by the UNIA in 1920.

The Pan-African flag — also known as the UNIA flag, Afro-American flag and Black Liberation Flag — is a tri-color flag consisting of three equal horizontal bands of (from top down) red, black and green. The Universal Negro Improvement Association and African Communities League (UNIA-ACL) formally adopted it on August 13, 1920 in Article 39 of the Declaration of the Rights of the Negro Peoples of the World,[1] during its month-long convention at Madison Square Garden in New York City.[2][3] Variations of the flag can and have been used in various countries and territories in Africa and the Americas to represent Pan-Africanist ideologies. Several Pan-African organizations and movements have often employed the emblematic tri-color scheme in various contexts. 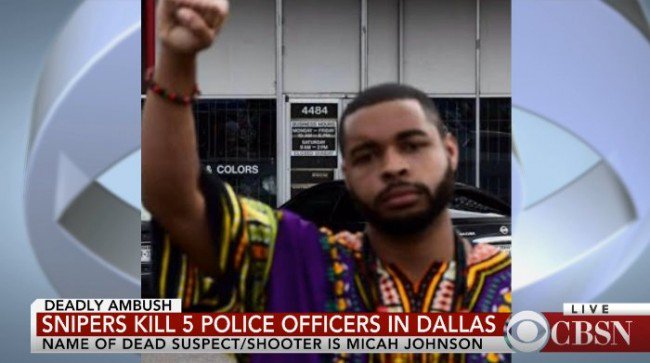