According to emergency radio dispatches, the incident began to unfold as law enforcement gathered at the scene before dawn.

Sometime past 6 a.m., fire rescue personnel got a report of shots being fired with multiple victims. Two minutes later, someone at the scene got on a police radio to report five shooting victims, including an agent shot in the leg. 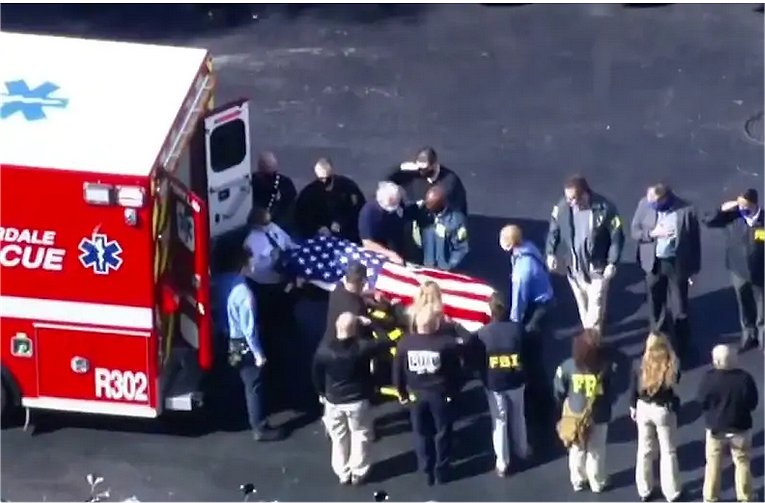 SUNRISE, Florida—Two FBI agents were killed Tuesday morning while serving a warrant at the home of a South Florida man suspected of possessing child pornography.

The officers killed were Special Agent Daniel Alfin, 36, and Special Agent Laura Schwartzenberger, 43, the FBI said on Tuesday afternoon. They died while “executing a federal court-ordered search warrant in a crimes against children investigation in Sunrise, Florida,” the feds said.

Three other agents were wounded, including two who were transported to a hospital in stable condition. The third agent did not need hospitalization, FBI Director Christopher Wray said in a statement. The suspect also died.

It’s the FBI’s deadliest day since 1994, when two agents were killed by a gunman inside Washington, D.C. police headquarters, according to the FBI’s Wall of Honor.

“Every day, the FBI Special Agents put themselves in harm’s way to keep American people safe,” Wray said, adding that the two agents “exemplified heroism today in defense of their country,” and that the “FBI will always honor their ultimate sacrifice and will be forever grateful for their bravery.”

FBI Agents Association President Brian O’Hare said in a statement to The Daily Beast, “These Agents were working to protect the most vulnerable in our society.”

The incident began at the Water Terrace apartment complex at around 6 a.m., a Sunrise Police spokesperson told The Daily Beast. When agents arrived, the suspect barricaded himself inside a unit.

Tiffany Walters, a 37-year-old resident at the apartment complex, told The Daily Beast she woke up around that time to a “loud bang” she initially thought was a car accident.

“After I heard sirens and eventually helicopters,” Walters said, adding that when she looked outside her window, she saw a helicopter fly away with what she believes was the FBI agent who was taken to the hospital.

By 9:04 a.m., authorities said the scene was deemed safe, but residents were still being asked to stay in their homes. Walters said at 9:15 a.m. she heard another loud bang, which she believes was associated with the suspect’s death.

“We’re still getting more information on what happened and we’ll have more to say, at a later date. We express our condolences,” Florida Gov. Ron DeSantis said during a press briefing.

A review of federal court records shows Schwartzenberger, who joined the FBI in 2005, had worked on several cases involving child exploitation, sextortion, and the internet. In 2013, she was a member of the FBI’s South Florida Violent Crimes Fugitive Task Force and appears to have worked on cases involving armored car heists and bank robberies, among others.

News clips show she was active in raising awareness about cybersecurity and the threat of online sex crimes. She commented to local news outlets about sextortion scams and last February gave a lecture on cyber crimes at Rockaway Middle School.

Special Agent Dan Alfin, who joined the FBI in 2009, was a member of the bureau’s Violent Crimes Against Children division.

He was involved in Operation Pacifier, which took down Playpen, one of the largest child pornography networks on the dark web. Site operators masked Playpen’s location, users, and ownership using the Tor anonymity network. FBI agents managed to unmask the site and its visitors with an unknown hacking technique, leading to 350 arrests in the U.S., 548 arrests abroad, and the rescue and identification of nearly 350 children exploited as part of the dark web ring.

Court documents show that Alfin was one of a few FBI agents responsible for monitoring Playpen after the bureau was able to sidestep the Tor anonymity network’s encryption and identify the IP addresses of individual Playpen users. Prosecutors used Alfin’s testimony about the FBI’s hack of Playpen in several cases linked to the investigation.

“It’s the same with any criminal violation: As they get smarter, we adapt, we find them,” Alfin said in a 2017 FBI news release announcing the sentencing of the site’s founder. “It’s a cat-and-mouse game, except it’s not a game. Kids are being abused, and it’s our job to stop that.”

Young, who’s lived in the neighborhood for 33 years, said two months ago Schwartzenberger organized a block party for a homeowner who moved away. She also showered the new neighbor who moved in with warm greetings.

“Laura was a sharp lady and very friendly,” Young told The Daily Beast as he stood outside his two-story gray-brick home, among six houses with American flags in the front. “The lady who just moved in told me Laura came over with a bottle of wine and welcomed her.”

He thought Schwartzenberger was having a get together when he saw several cars parked in her driveway on Tuesday—then he turned on the news.

“For her to be killed serving a search warrant is a shock. It’s sickening,” he said. “I don’t understand why people say ‘defund the police.’ Law enforcement is a tough job. Now, you have a mom who’s not coming home tonight to see her kids.”

Police cars blocked the family’s cul-de-sac on Tuesday and a Coral Springs cop said, “The street is closed. Given it just happened, her family wants privacy at this time.”

According to its website, the Water Terrace apartment complex is an upscale gated community that houses a fitness center, spa, tennis courts, and a pool.

Andrew Solomon, a 31-year-old who just moved into the Water Terrace apartment complex, told The Daily Beast he woke up early for work on Tuesday morning to see “a helicopter flying over” the building. When he tried to leave, two Sunrise police officers were stopping residents, asking them to open their trunks.

Solomon said he was asleep when the shooting happened on the northwest side of the complex. Property managers sent around a “stay at home order” for all residents and he planned to leave work early to comply with the police order, he said.

“It is a real nice neighborhood [and] well kept around a pretty lake,” he added. “So it is surprising to hear something [like this] happened.”

Walters said the neighborhood, where she has lived for four years, is quiet. At first, her family thought the police presence might have been related to “folks from January 6th,” referring to the U.S. Capitol riot.

“Once I heard it was a police raid I knew it would be handled,” she said.