The officials would not provide details of how Hamza bin Laden died or if the U.S. played a role. It is unclear if Washington has confirmed his death.

WASHINGTON — The United States has obtained intelligence that the son and potential successor of al Qaeda leader Osama bin Laden, Hamza bin Laden, is dead, according to three U.S. officials.

The officials would not provide details of where or when Hamza bin Laden died or if the U.S. played a role in his death. It is unclear if the U.S. has confirmed his death.

Hamza bin Laden’s last known public statement was released by al Qaeda’s media arm in 2018. In that, he threatened Saudi Arabia and called on the people of the Arabian peninsula to revolt.

Hamza bin Laden is believed to have been born around 1989. His father moved to Afghanistan in 1996 and declared war against the U.S. Hamza went with him and appeared in al Qaeda propaganda videos. As leader of al Qaeda, Osama bin Laden oversaw operations against Western targets that culminated in the Sept. 11, 2001, attacks on New York’s World Trade Center and on the Pentagon.

Navy SEALS killed Osama bin Laden in 2011 during a raid on his Abbottabad, Pakistan, compound. Hamza was not found at the compound. Letters seized from the compound suggested the elder bin Laden wanted his son to join him in Abbottabad and was grooming him as a leader.

Hamza is one of 11 sons of Osama bin Ladin. Hamza bin Laden, the son of the late al-Qaida leader, has married the daughter of Mohammed Atta, the lead hijacker in the 9/11 terror attacks, according to his family. Bin Laden’s wives and surviving children have returned to Saudi Arabia, where they were given refuge by the former crown prince Mohammed bin Nayef. The women and children remain in close contact with Bin Laden’s mother, Alia Ghanem, who told the Guardian in an interview that she remained in regular touch with surviving family members. 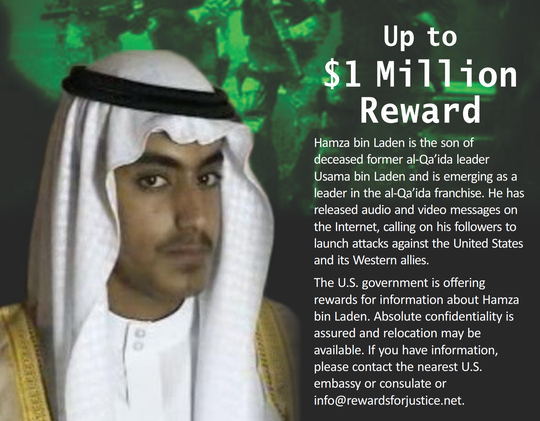 Despite al-Qa`ida’s generally dim view of women, it appears that Usama bin Ladin respected and valued each of his wives. But he was surely familiar with the Qur’an’s warning that, “Try as you may, you cannot treat all your wives impartially.” It was well known that bin Ladin had a favorite. This was Hamza bin Ladin’s mother, Khairia Sabar, a child psychologist from the respected al-Hindi family of Saudi Arabia. The pair had been introduced when Saad, one of bin Ladin’s sons by his first wife, Najwa al-Ghanem, had attended Khairia’s clinic to receive therapy for a mental disorder.3 Khairia was single, in her mid-30s, and in fragile health—an unpropitious situation for a woman in a conservative kingdom where teenage brides are far from uncommon. Bin Ladin, by contrast, was seven years younger, the son of a billionaire, and already making a name for himself as a fundraiser for the mujahideen struggle against the Soviets in Afghanistan. Moreover, by this time, bin Ladin already had two wives. But Najwa, the first of them, encouraged him to pursue Khairia, believing that having someone with her training permanently on hand would help her son Saad and his brothers and sisters, some of whom also suffered from developmental disorders.4

Not surprisingly given Khairia’s age and state of health, she and bin Ladin struggled to conceive. Over the first three years of their marriage, as bin Ladin moved back and forth between Saudi Arabia and the theater of war in Afghanistan, she endured miscarriage after miscarriage. During this time, bin Ladin added a fourth wife to the family—another highly educated Saudi woman, Siham Sabar.5 Then, in 1989, both Siham and Khairia bore him sons. Siham’s was called Khalid, a name that in Arabic means “eternal.” Khairia’s boy was named Hamza, meaning “steadfast.” Thenceforward, in accordance with ancient Arab custom, Khairia became known by the honorific Umm Hamza, the Mother of Hamza. The boy would remain her only child by bin Ladin, but that fact has by no means diminished either Hamza’s importance or Khairia’s.