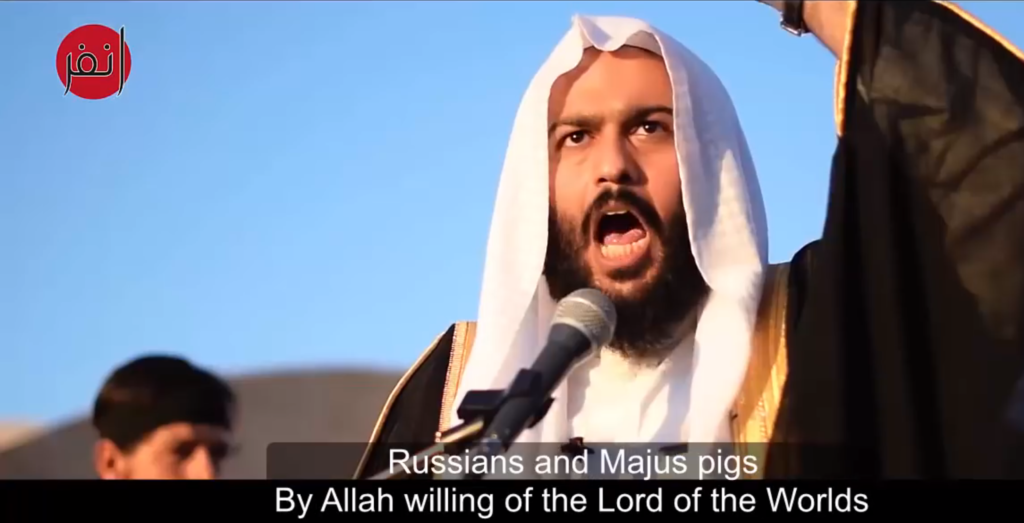 LWJ: Sheikh Abdallah Muhammad al Muhaysini, one of the most influential jihadist ideologues in Syria, has launched a new recruiting campaign that aims to indoctrinate thousands of young men. The mobilization effort, named “Take Up Arms, Do Not Sit Still,” began online and throughout Syria on Apr. 20.

One of the first propaganda videos released for the effort shows Muhaysini speaking in front of a large crowd at a refugee camp. The Saudi cleric, who is linked to al Qaeda, is treated like a rock star at the event. The rally was supposedly led to between 200 and 300 new recruits joining the jihadists’ cause.

Muhaysini begins his speech by blasting Syrian dictator Bashar al Assad, Iran and Hezbollah. A clip of Hasan Nasrallah, Hezbollah’s leader, is played. “If the battle with those terrorists and takfiris needs me and all Hezbollah to go to Syria, we will go to Syria,” Nasrallah promises.

Muhaysini responds, “We say come, and we swear by Allah we will [introduce] you to the dogs of Sham.”

The jihadist cleric continues by saying that the refugees in the camp had their homes destroyed by Assad and suffered from his barrel bombs. Muhaysini points to an empty tent that he says will be filled with the “new mujahideen,” who “will fill the land of Sham with the blood of the Russians” and the Iranians. 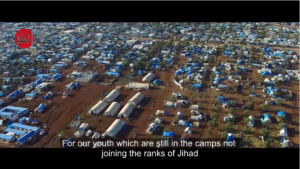 The video, which is just over 10 minutes long and includes English subtitles, is well-choreographed. It appears that a commercial drone was used to shoot footage from overhead. For instance, an aerial shot of the camp (seen on the right) plays as Muhaysini criticizes the youth who live there for failing to join the jihad.

“O you here, know I love you,” Muhaysini says, before imploring the camp’s youth to join the jihadists. He preaches the virtues of martyrdom: “Allah’s religion is awaiting you. What makes you sit? O you hero, are you afraid of martyrdom? Do you know what martyrdom is? It is one bullet in the cause of Allah which makes you leave the life. Then you will become alive in Gardens of Eternity by the Lord of the Worlds.”

Muhaysini calls for all willing males over the age of 15 to make their way to the empty tent. Young men and adolescents then stream in, committing themselves to the jihad against Assad and his allies.

In a second, longer video, Muhaysini is joined by three others and together they explain the purpose of the recruiting drive. The additional men are Abu Namis (a military commander in Liwa al Haq), Sheikh Muslih al Alyani (deputy chair of the Jihad’s Callers Center, which is headed by Muhaysini), and Dr. Ayman Harush (a lecturer at the University of Aleppo).

The Saudi cleric explains how a new recruit is assigned to an organization. Once a young man agrees to join, he is sent to the “central command of the campaign,” which coordinates across the various factions and decides where he goes. They all receive sharia instruction, but only the best are armed. Between 400 and 500 new mujahideen have been selected thus far, according to Muhaysini, who says that they hope to attract 5,000 new jihadists.

Muhaysini says Syrians, including those who fled to Turkey, are being recruited and he hopes that the ideology of jihad takes root throughout the Levant, beyond the immediate call to arms. He adds that the campaign is a response to the Iranian-backed popular mobilization forces fighting in Iraq and Syria, as well as the Shiites’ mobilization throughout the region. Muhaysini criticizes the Sunni scholars who refuse to mobilize the Sunni youth to counter their Shiite adversaries in Iran and Hezbollah.

Harush, the lecturer in Aleppo, justifies the jihad as a defensive one, saying that Iran has brought in fighters from throughout the Middle East to attack the Sunnis. And Abu Namis, the Liwa al Haq official, says that the Sunni factions do not have a surplus of fighters, as some claim. Abu Namis calls on foreign fighters to join their Syrian counterparts.

Muhaysini wears multiple hats inside Syria. In addition to being the chairman of the Jihad’s Callers Center, he is a senior judge in Jaysh al Fath, a rebel coalition that overran the Idlib province in 2015. Jaysh al Fath was co-founded by Al Nusrah Front, which is al Qaeda’s official branch in Syria, and another al Qaeda-linked group, Ahrar al Sham.

Muhaysini and some of his supporters online refer to him as an “independent” jihadist. The Long War Journal assesses that this is unlikely and he is probably a senior al Qaeda sharia official. He has numerous connections to al Qaeda’s international network.

He was a student of Sulayman Al Alwan, a jihadist cleric responsible for indoctrinating some key figures within al Qaeda. The 9/11 Commission found that al Alwan even instructed one of the 9/11 hijackers. Muhaysini has defended and spoken fondly of al Qaeda emir Ayman al Zawahiri. In 2014, Muhaysini even issued a proposal for jihadist reconciliation that was timed to coincide with Zawahiri’s own. The initiative was intended to reconcile the Islamic State with its jihadist rivals in the Al Nusrah Front and Ahrar al Sham. While the latter parties agreed to the plan, the Islamic State rejected it.

Muhaysini works closely with Al Nusrah Front and other al Qaeda groups in Syria, such as the Turkistan Islamic Party (TIP) and similar ethnic jihadist brigades. His work has been featured in Al Masra, an al Qaeda newsletter launched earlier this year, as well as in the Taliban’s literature. Muhaysini’s popular social media sites are regularly littered with references to al Qaeda, including eulogies for senior al Qaeda operatives killed in American airstrikes.

Images and advertisements from the “Take Up Arms, Do Not Sit Still” campaign 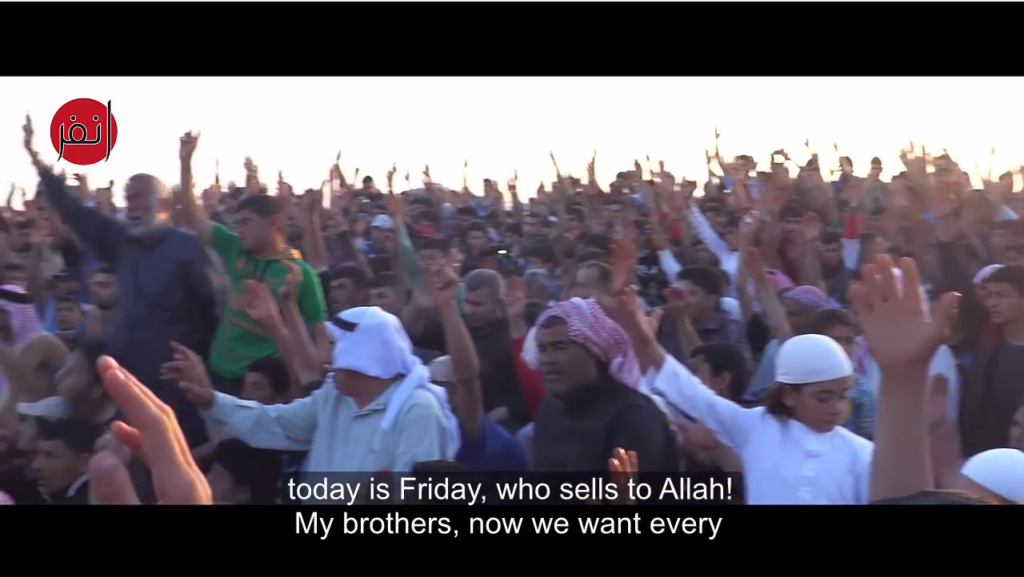 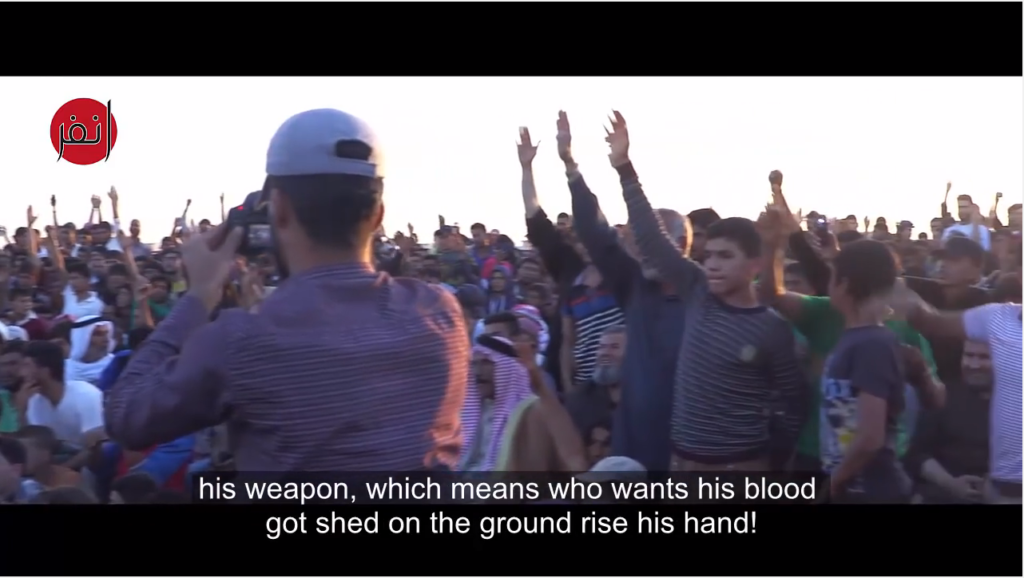 Men and youth enter the recruiting tent set up at a refugee camp: 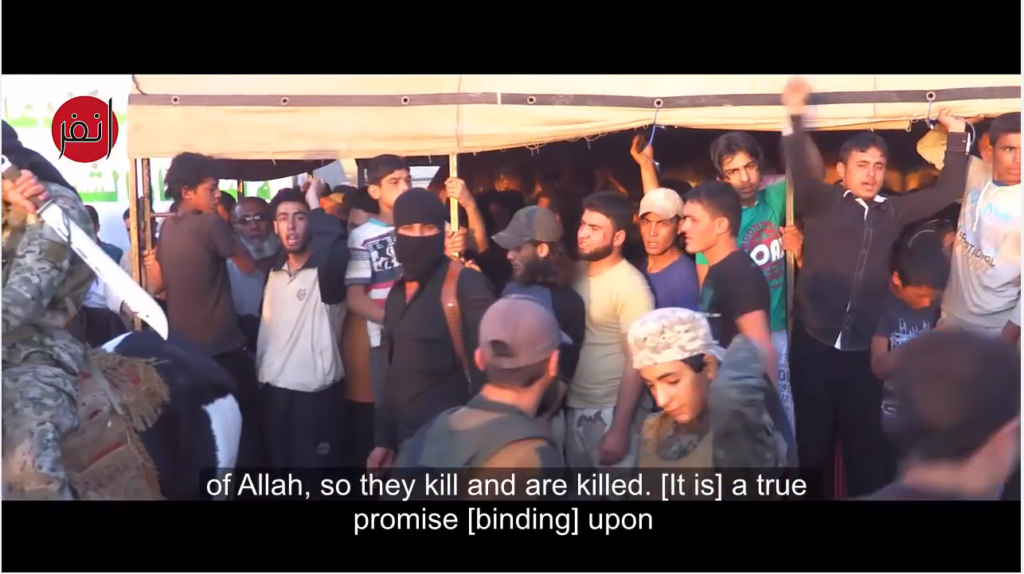 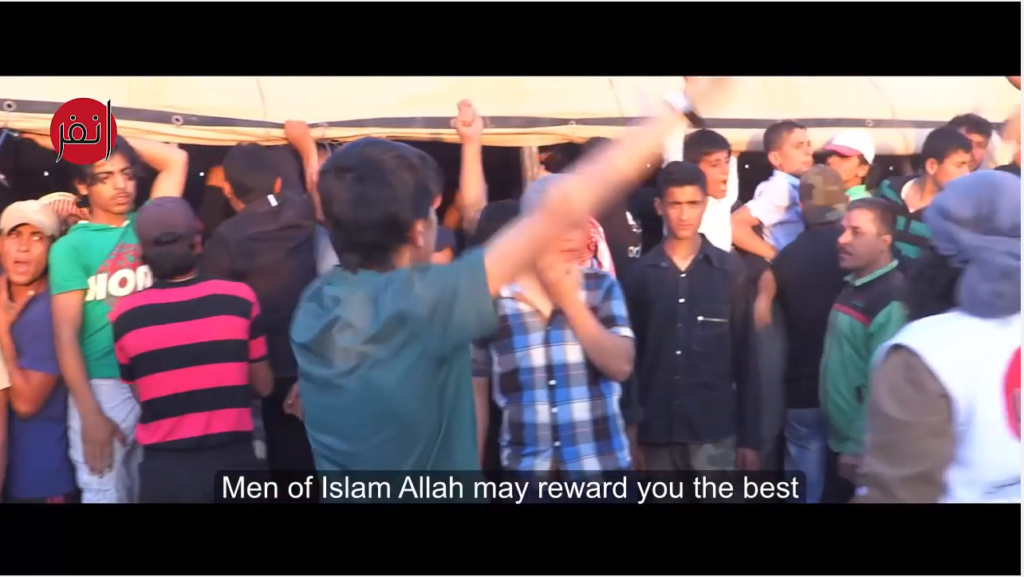 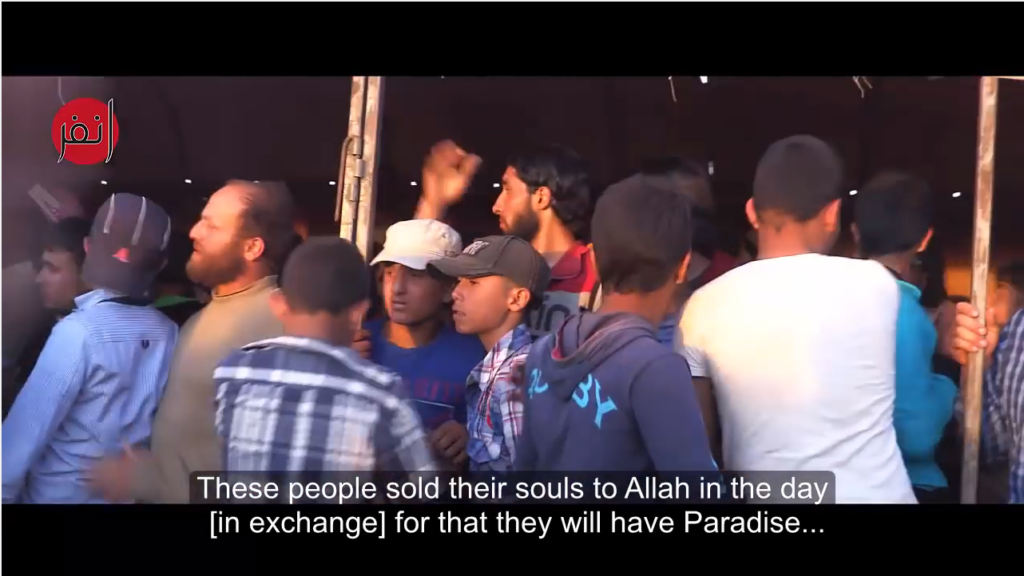 Another overhead shot, perhaps recorded by drone, from the event at a refugee camp: 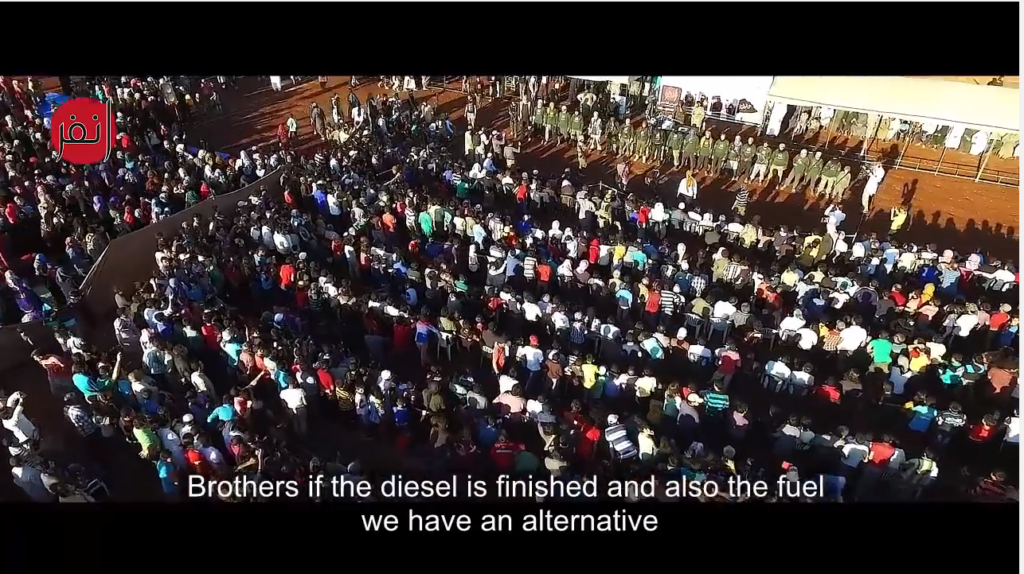 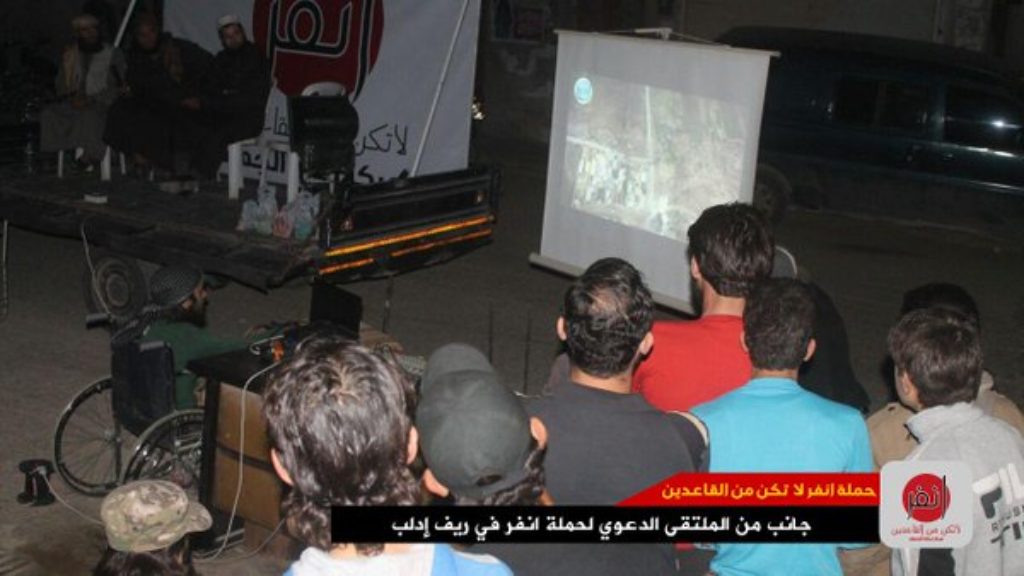 Some of the campaign’s new recruits: 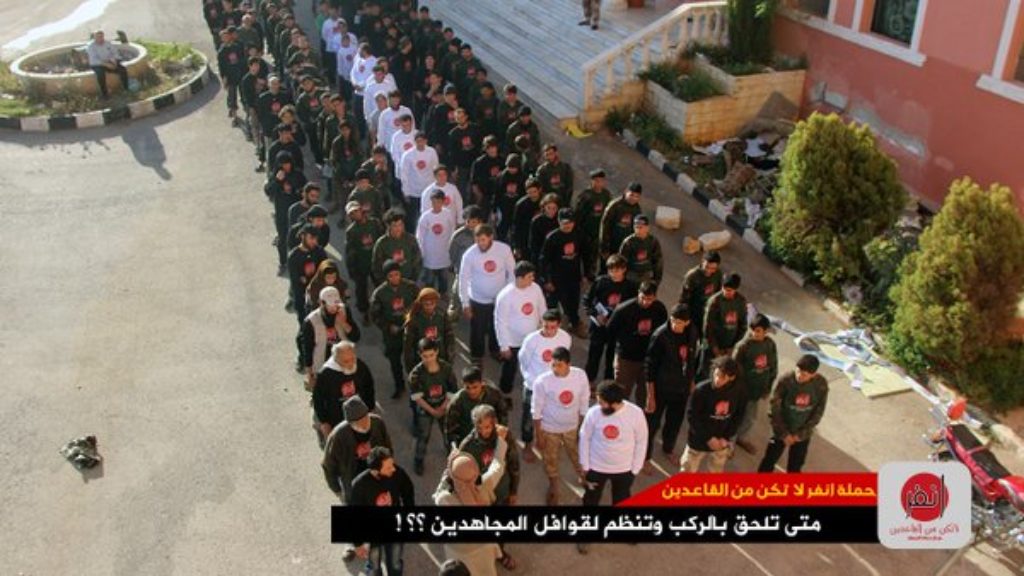 A banner calling for donations: 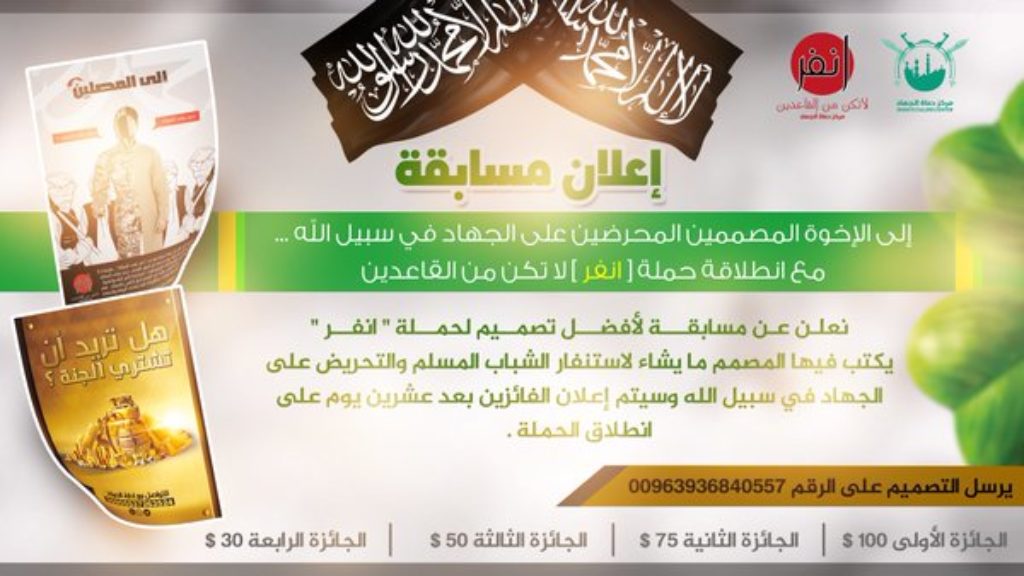 An attendee at one of the events records Muhaysini on his phone: 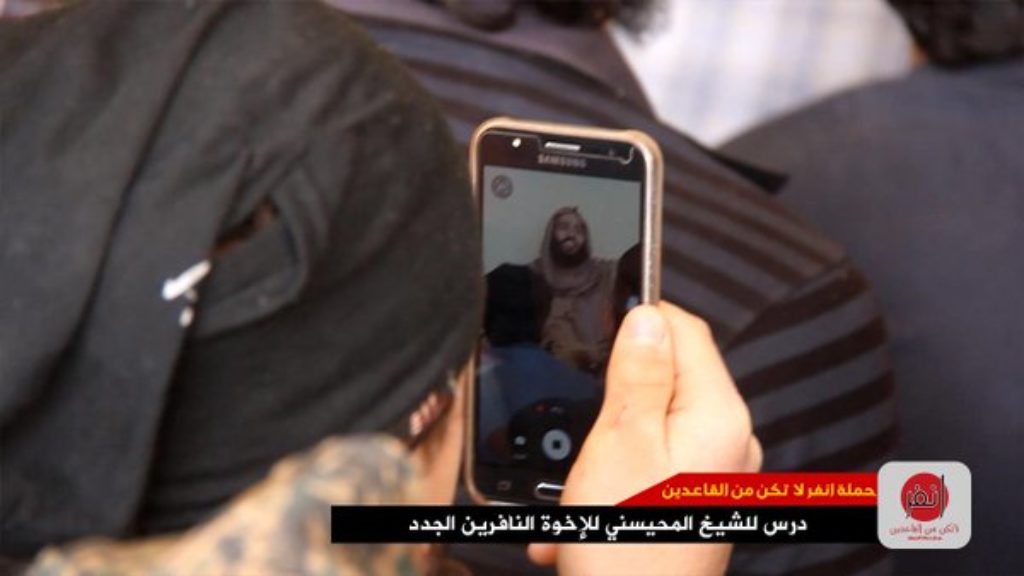