The Islamic State (IS) group wilfully defies any frontier blocking its route to an Islamic caliphate. According to Tarek Osman, author of Islamism, we are only part-way through a revolution with no clear endgame.“Sykes-Picot was a pillar of a system in the Middle East that we are watching fall apart today, as something new is being formed. Right now, we’re in a fluid, chaotic phase and a new system will not emerge for a number of years,” Osman told Middle East Eye. More from MiddleEastEye.

More on Sykes-Picot: The Agreement as Written

As I noted in my first post on the Sykes-Picot Agreement, which was concluded a century ago this month, “Sykes-Picot” has become a convenient shorthand for the entire constellation of agreements and understandings that contributed to the postwar settlement, agreements spread out from as early as 1915 to as late as 1939, or even later if we include the partition of Palestine. In coming days I’ll be dealing with the actual agreements, but first let’s look at the real Asia Minor Agreement negotiated between Sir Mark Sykes and M. François Georges-Picot in 1916 and what borders it actually envisioned.

Britain and France began discussions of a post-Ottoman settlement on November 23, 1915, with Georges-Picot negotiating with Sir Arthur Nicolson, soon replaced by Sir Mark Sykes,. At that time efforts by David Lloyd George and Herbert Samuel to promote a Jewish state in Palestine were already under way, and Sir Henry McMahon in Egypt was already committing Britain to support an independent Arab state in correspondence with Sharif Hussein of Mecca. Another round of negotiations took place in December, and in February 1916 Sykes visited Petrograd to meet with Russian Foreign Minister Segey Sazonov. Negotiations with the Zionists and the commitments to Sharif Hussein were known to Sykes.

The basic text was ready by May. On May 9, French Ambassador to London Paul Cambon transmitted it in a letter to British Foreign Secretary Sir Edward Grey, who returned it  with approval on May 16. Signed May 19 and with a formal exchange of notes May 2, the precise date that should be “celebrated” as the centenary is a little slippery.

The agreement’s text is below after the map. Although the agreement gives lip service to the idea of an “independent” Arab stste, it would be subordinate to British and French zones of influence, and both had zones in which they claimed direct control. Britain and France made a umber of guarantees to each other (Palestine would be under international control but with Britain controlling Haifa, Acre, a railway to Egypt and a future railway to Iraq.)

Both parties seemed to recognize that the agreement had potential conflicts, but it was a secret agreement, and intended to remain so. As I’ve tried to make clear, I’m not defending Sykes-Picot, which was imperialist arrogance at its worst;I’m simply saying that, except for a general roe for France in Syria (but then including Mosul) and Britain in Iraq. The status of Mosul and Palestine would be among the first things to change, and of course the whole disposition of Anatolia would change.

One thing that would speed the unraveling of the details of  Sykes-Picot was its sudden revelation by the Bolsheviks in November 1917, which we’ll discuss in Part 3. 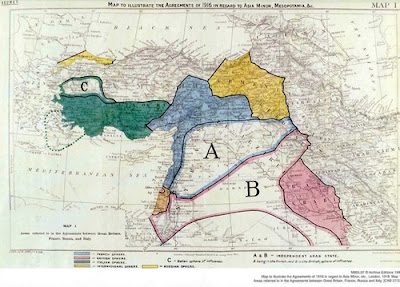 It is accordingly understood between the French and British governments:

That France and Great Britain are prepared to recognize and protect an independent Arab states or a confederation of Arab states (a) and (b) marked on the annexed map, under the suzerainty of an Arab chief.

That in the blue area France, and in the red area great Britain, shall be allowed to establish such direct or indirect administration or control as they desire and as they may think fit to arrange with the Arab state or confederation of Arab states.

That in the brown area there shall be established an international administration, the form of which is to be decided upon after consultation with Russia, and subsequently in consultation with the other allies, and the representatives of the Shariff of Mecca.

That great Britain be accorded (1) the ports of Haifa and Acre, (2) guarantee of a given supply of water from the Tigris and Euphrates in area (a) for area (b). His majesty’s government, on their part, undertake that they will at no time enter into negotiations for the cession of Cyprus to any third power without the previous consent of the French government.

That Haifa shall be a free port as regards the trade of France, her dominions and protectorates, and there shall be no discrimination in port charges or facilities as regards French shipping and French goods. There shall be freedom of transit for French goods through Haifa and by the British railway through the brown area, whether those goods are intended for or originate in the blue area, area (a), or area (b), and there shall be no discrimination, direct or indirect, against french goods on any railway, or against French goods or ships at any port serving the areas mentioned.

That in area (a) the Baghdad railway shall not be extended southwards beyond Mosul, and in area (b) northwards beyond Samarra, until a railway connecting Baghdad and Aleppo via the Euphrates valley has been completed, and then only with the concurrence of the two governments.

That Great Britain has the right to build, administer, and be sole owner of a railway connecting Haifa with area (b), and shall have a perpetual right to transport troops along such a line at all times. It is to be understood by both governments that this railway is to facilitate the connection of Baghdad with Haifa by rail, and it is further understood that, if the engineering difficulties and expense entailed by keeping this connecting line in the brown area only make the project unfeasible, that the French government shall be prepared to consider that the line in question may also traverse the Polygon Banias Keis Marib Salkhad Tell Otsda Mesmie before reaching area (b).

For a period of twenty years the existing Turkish customs tariff shall remain in force throughout the whole of the blue and red areas, as well as in areas (a) and (b), and no increase in the rates of duty or conversions from ad valorem to specific rates shall be made except by agreement between the two powers.

There shall be no interior customs barriers between any of the above mentioned areas. The customs duties leviable on goods destined for the interior shall be collected at the port of entry and handed over to the administration of the area of destination.

It shall be agreed that the french government will at no time enter into any negotiations for the cession of their rights and will not cede such rights in the blue area to any third power, except the Arab state or confederation of Arab states, without the previous agreement of his majesty’s government, who, on their part, will give a similar undertaking to the french government regarding the red area.

The British and French government, as the protectors of the Arab state, shall agree that they will not themselves acquire and will not consent to a third power acquiring territorial possessions in the Arabian peninsula, nor consent to a third power installing a naval base either on the east coast, or on the islands, of the Red Sea. This, however, shall not prevent such adjustment of the Aden frontier as may be necessary in consequence of recent Turkish aggression.

The negotiations with the Arabs as to the boundaries of the Arab states shall be continued through the same channel as heretofore on behalf of the two powers.

It is agreed that measures to control the importation of arms into the Arab territories will be considered by the two governments.

I have further the honor to state that, in order to make the agreement complete, his majesty’s government are proposing to the Russian government to exchange notes analogous to those exchanged by the latter and your excellency’s government on the 26th April last. Copies of these notes will be communicated to your excellency as soon as exchanged. I would also venture to remind your excellency that the conclusion of the present agreement raises, for practical consideration, the question of claims of Italy to a share in any partition or rearrangement of turkey in Asia, as formulated in Article 9 of the agreement of the 26th April, 1915, between Italy and the allies.

His Majesty’s Government further consider that the Japanese government should be informed of the arrangements now concluded.