We cant predict who will be part of her cabinet staff, but given those who worked in the White House during Bill Clinton’s administration and now for the Hillary campaign,  you can bet it will be similar chaos and creepy people.

So, given those that are part of Hillary’s public campaign team and her clandestine operations team let us examine some names and the additional histories of these people. Note, how these people are recycled from decades of socialist political beltway occupation.  Read more...

The war of the wills, the war of the agencies and the war of politics in Washington DC is underway. This will advance into a governmental crisis of proportions that make Watergate look small by comparison.  Read more... 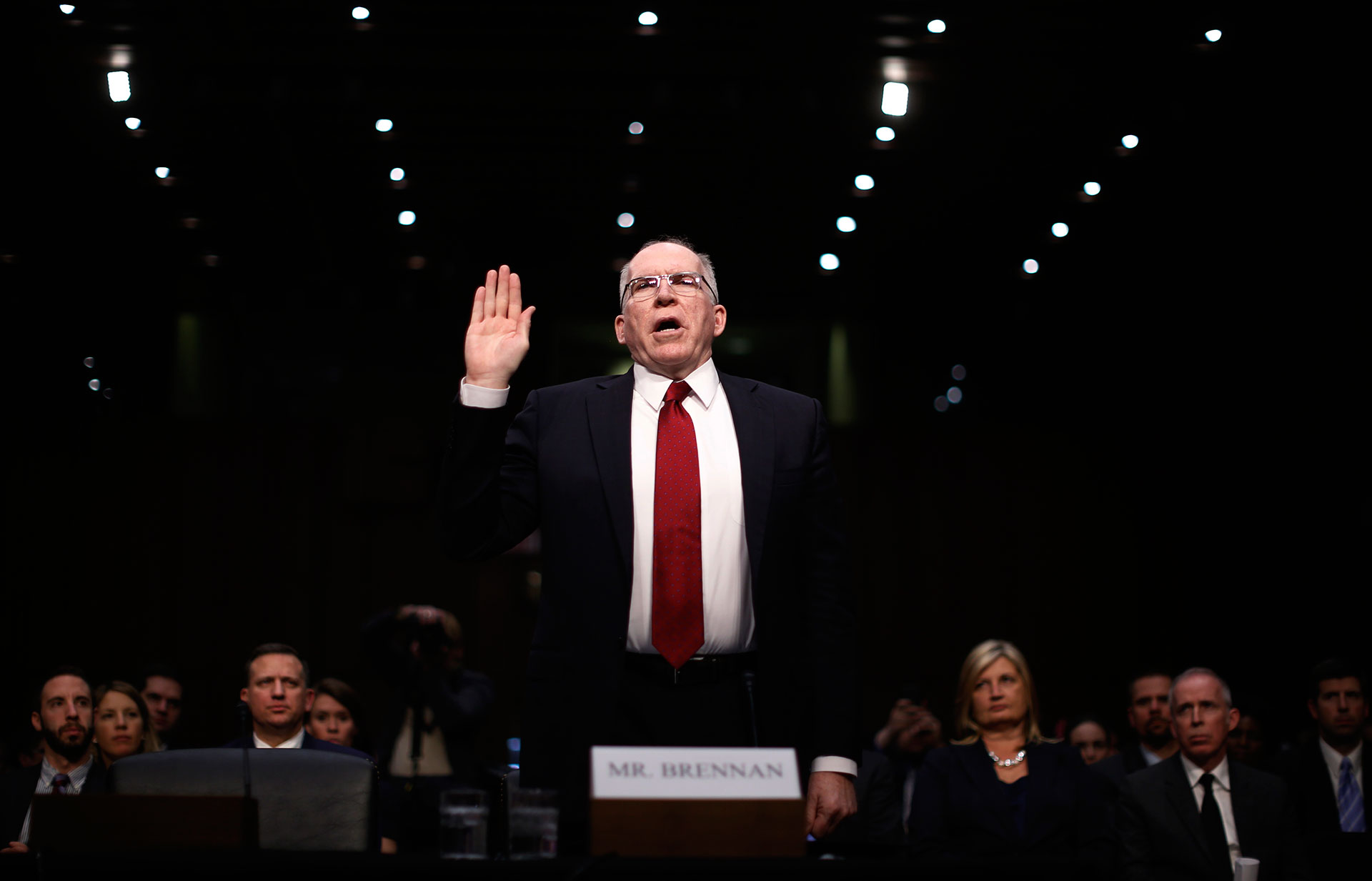 NEW DIRECTION: John Brennan at a Senate Intelligence Committee hearing on his nomination to be the director of the CIA in 2013. Brennan has restructured the agency to REUTERS/Jason Reed 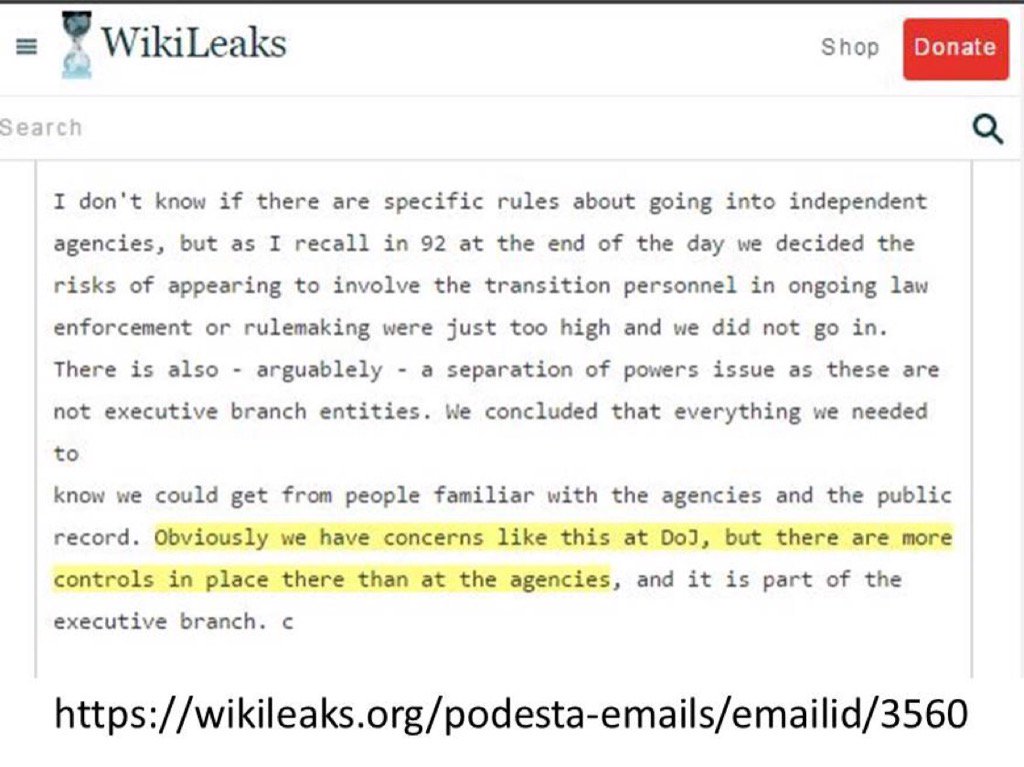 Controls in place at the DoJ…uh huh and it is part of the Executive Branch..uh huh again.

So, what we have here are political operatives that have established a covert governmental mafia operation that works the system by a limitless team of lawyers, damage control organizations and by manipulating media, all of which are willing accomplices. While most that are paying attention consider the missing Hillary emails relate to Benghazi, it is more likely the larger inventory of communications deal with the Clinton Foundation of which the Department of Justice is a government funded operation protecting RICO collusion. Andy McCarthy describes it all in a perfect summary.  Read more...

We gotta zap Lanny out of our universe.
Can’t believe he committed her to a private review of her hard drive on TV. ———-
Forwarded message ———- From: Nick Merrill <nmerrill@hrcoffice.com> Date: Sun, Mar 8, 2015 at 1:42 PM Subject: Re: Lanny Davis To: Robby Mook <robbymook2015@gmail.com>, Jennifer Palmieri < jennifer.m.palmieri@gmail.com>, Kristina Schake <kristinakschake@gmail.com>
Here’s the rough. —>>
i want to ask you about preserved. because when the government said preserved. do you think they had in mind someone who never turned over any records during the entire four years that she was secretary of state, never pushed over any records when she left as secretary of state, did not, in fact, turn over any records until almost two years after she left as secretary of state? do you think that’s what the rules meant when president obama, when the federal records act, when the foreign manual all talked about preserving records? >>
the answer is yes, and you — >>
two years after, that’s what they meant? >>
and you, chris wallace, may have a suggested belief of what the word may. i’m talking about what is the case. those records are preserved. governor huckabee said well maybe they were deleted. last time i looked you cannot delete on a hard drive. there can be a neutral party to review all these records. nothing unlawful — >>
you’d like to have a neutral party? >>
i said there can be — >>
obviously there can be. i understand that. i’m asking do you think that’s a reasonable idea? >>
i think it is a reasonable idea if anybody has any doubts that there’s a delete on a hard drive — >> to have an independent — >>
go inspect her private e-mail? >>
i think there is a reasonable idea if the state department asks, she will say yes. if there’s a s&p she must say yes. this is a bogus notion that what might be the case versus what is the case. >>
how about the obama white house in 2011 saying that all work should be conducted on government e-mails? >>
in fact, the obama white house has been unclear about what the policy is, because there are many — >> president was talking about with bill plante. he didn’t say it was unclear. >>
you know, chris, what the president said was he didn’t know even though the white house knew and the president then went on to support hillary clinton. so if you just let me finish, the fact is, nobody says it’s illegal. she’s turned over all of her e-mails, the first secretary of state to ever do that. and going forward — >>
when did she turn them over? >>
she turned them over last — well she said she — >>
turned them over in december? >>
to turn everything to the public over. she turned them over last december, yes.
From: Robby Mook <robbymook2015@gmail.com> Date: Sunday, March 8, 2015 at 12:32 PM To: NSM <nmerrill@hrcoffice.com>, Jennifer Palmieri < jennifer.m.palmieri@gmail.com>, Kristina Schake <kristinakschake@gmail.com> Subject: Lanny Davis Did we figure out what he really said this am?